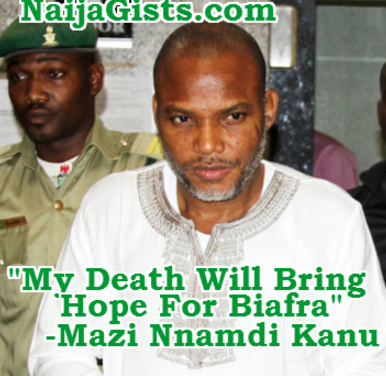 46-year-old Nnamdi Kanu was arrested by the Department of State Security at a hotel in Lagos in October, 2015, on his way back from the United Kingdom. He was subsequently charged to court for alleged treasonable felony. Initially, the court ordered that he be remanded in prison custody.

Since then, Kanu has been languishing in Kuje prison. His arrest, continued detention and trial sparked off protest and agitations by pro-Biafra groups for his release. Also, Igbo socio-cultural organization, Ohanaeze Ndigbo, called for his release.

Two high courts had granted Kanu bail. The courts orders were not adhered to by the Federal Government and DSS prompting more protest and agitations for Kanu’s release. In some of the protests, the agitators clashed with security agents which led to high casualties on the part of the Pro- Biafra groups and security agents.

Ohanaeze Ndigbo, while marking this year’s World Igbo Day in Enugu last month, had given the Federal Government a matching order to release Kanu unconditionally, saying his continued incarceration may escalate more damages in the South-East zone of the country.

President General of Ohanaeze, Chief Gary-Enwo Igariwey, whose address was read by the Deputy President General, Sir O.A.U Onyema during the occasion, urged the Federal Government to obey the order of a High Court which earlier granted Kanu bail. “Ohanaeze feels that there should be a critical look at the reasons why the young man who was agitating without arms or element of violence should be incarcerated,” urging the Federal Government to re-evaluate the circumstances which made the court of law to earlier grant him bail and see to which extent it can be useful in putting things straight.

“Mazi Nnamdi Kanu’s incarceration till now does not seems to be palatable and does not seem to pass a positive message”.

Continue Reading
You may also like...
Related Topics:mazi nnamdi kanu one year in prison