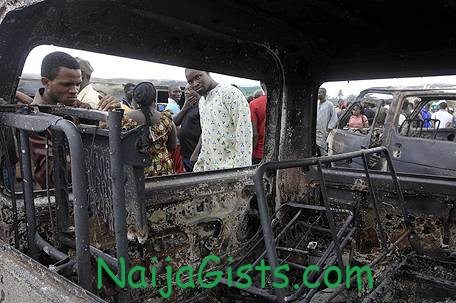 At least 26 people have died in two separate tragic auto accidents that happened along Sagamu-Benin Expressway on Saturday Sept 8, 2012. naijagists.com

12 people were burnt beyond recognition in this ghastly auto crash.

The auto accident involved the collision of Toyota Hiace transport bus owned by Ajetunmobi motors and a Mack Truck.

According to an eyewitness of the collision, the two drivers were said to have been speeding beyond control on their way from Lagos.

The Toyota bus with plate registration number XA 650 DBN then lost control and collided with the Mack truck with registration # LG 35 BBG few meters from a popular Ososa bridge.

In the accident, 14 passengers traveling to Ondo State ran into a river with no survivor while other 12 passengers of the truck got burnt beyond recognition.

Mr Hamsat Tommy, the Ijebu Zonal Commander, the Ogun State Traffic Compliance and Enforcement Agency, said that the 12 bodies had been taken to General hospital, Ijebu-Ode

“It was indeed a sad and busy day for us. We were trying to rescue those that plunged into the river when they informed us about the explosion at Ososa bridge“ said Ijebu-Ode unit commander of FRSC