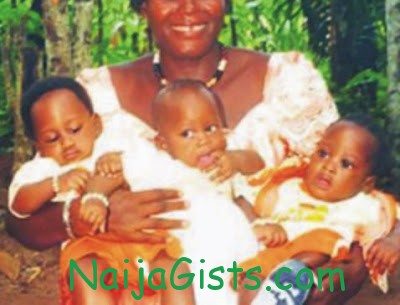 A woman was delivered of a set of triplet on May 4, 2012, and barely two days after the two boys and a girl arrived, her husband, Kabiru Yusuf, divorced her for giving him three babies at a time. Before giving her the red card, Yusuf beat the mother of the triplet silly. Welcome to the world of 26-year-old Zainab Siraju.naijagists.com

When the news of Zainab’s ordeal first broke out about four months ago, not many residents of Kaduna, Kaduna State believed the story. All efforts to trace Zainab then, also proved abortive until August 30, 2012, when she returned to the hospital to enable the triplet undergo medical treatment. In an interview with Sunday Sun at the Yusuf Dantosho Memorial Hospital, where she was delivered of her babies, Zainab vowed that even if the father of her new babies made efforts to reconcile with her, she would never go back to a man who had no pity for her.

“Two days after I put to bed and was discharged from the hospital, I received the beating of my life from my husband for giving birth to triplet. The next thing was that he issued me a divorce letter,” she said.

The embattled woman, who could not hold back tears while narrating her ordeal, accused her run-away husband of lack of care. This was even as she alleged that she was beaten up by her brother in-law for daring to make her case known to the media. However, Zainab whose marriage to Kabiru Yusuf was her second, said she had no regret having the triplet despite the rejection by their father. Zainab, who also had three boys for her first husband, would not state why her first marriage crashed. She simply said she might have been chased her out of her first marriage by fate to have her three bundles of joy for Kabiru Yusuf.

Zainag said: “Actually I was married before, but the marriage didn’t last. I had three children there who are presently with their father. I believed I left my first husband because I was destined to have triplet for Kabiru and these are my first delivery for him.

“But, since he divorced me for having triplet, I moved in with my parents in Tudun Wada here in Kaduna, where assistance have come from good people, who have been assisting me with money, food and clothes.”

The mother of six also disclosed that a few days after her return from the hospital, her husband’s younger brother also attacked her for disclosing her ordeal to the public through the media.

Asked if she would go back to her husband, Zainab said: “I will not go back to him even if he begs me because of his uncaring attitude, which I am sure he can’t stop. He didn’t take care of me despite the fact that he works at Panteka.

“He was aware before my delivery that I was carrying triplet. He was adequately informed, because we did scan and it was revealed that I was pregnant with triplet.

“I am not disturbed that I gave birth to triplet. I use this opportunity to thank God for blessing me with the triplet and I pray to God to bless them for me.”

Zainab also ruled out the possibility of getting married again, saying that all that mattered to her was how to cater for her children.

Hear her: “I’m not planning to re-marry. I want to take proper care of my children, give them good training and a sound education. So, I will welcome any job opportunity that comes my way to enable me take care of my babies.”

Also speaking to Sunday Sun, the Matron-in-charge of Paediatrics at the Yusuf Dantosho Memorial Hospital, Mrs. Ajiyana Ramatu, said: “After her delivery, her husband came here, as if he was going to do something, but did nothing. So, I had to go round my colleagues to see if there was any material assistance that we could give her.

“In the process, some people gave some cash while others brought clothes. Two days later, when she was discharged from the hospital, she was divorced for giving birth to triplet.”

Abdullah said: “It is sad because when he slept with her, he did it with the aim of having a child. But, if Allah (SWA) is ready to bless you, He will not inform you. It will just come to you like a blessing, just the way it came to the father of triplet who beat his wife and divorced her.

“He never knew what kind of children they would be or what blessing the Almighty has for them and he (Yusuf) can never say that this was why He has blessed him with triplet and did not give others. But he went ahead to divorce her. Therefore, he did not offend the woman but his creator, Allah, because she is innocent.

“This is an act of ignorance, an animalistic act. Even when animals give birth to two or three or sometimes four, it is not on record that they complain. Take for instance, how birds hatch many eggs and yet they go around with them and feed them without complaining. The mother-bird does not kill or throw them away because she cannot feed them.

“Allah (SWA) has said ‘don’t try to kill your children because you are poor, I’m the giver of all things both the poor and the rich.’ So, what this man did was an act of ignorance.

“But, if after the knowledge and sound Islamic advice, he insists on his decision, Allah (SWA) will punish him, starting from this world till the hereafter.

“Because this is a gift from Allah. Look at three babies at a time when some families search for just a child for years but God didn’t give them. But look at one man trying to turn down the blessings of Allah. The man should fear Allah.

“My advice to the man and the woman is that the father of the triplet should repent and seek Allah’s forgiveness and pray to Allah to bless him so as to provide for the children. As for the woman, she should pray and be patient.”

Also speaking, the Imam, Main Central Mosque Barnawa, Kaduna, Muhammad Bello Awwal, said the man that divorced his wife because she had a set of triplet was playing god because Allah is the giver and taker of all things.

Awwal said: “First of all, that man does not believe in destiny because if he did, he would know that they were destined to have triplet and believing in destiny is central to the article of faith in Islam.”

But Kabir Yusuf, a welder, denied that he divorced his wife for giving birth to a set of triplet. Yusuf accused his former wife of conniving with the media to tarnish his image, saying that he divorced her because she was disrespectful to his mother.

Yusu said: “I was surprised when my attention was drawn to a programme on DITV and some newspapers that I divorced my wife because she gave birth to a set of triplet. This, to me, was an insult because God gave me those children. Why would I maltreat her? I divorced her four months ago but the media reported it as if it was yesterday. She lied against me.”

Yusuf recalled that on the day she was to give birth in May, his mother and younger sister took her to Dantsoho Hospital where she spent days before delivery.

He added: “She accused my mother and I of abandoning her but she forgot that on the day she went into labour, we took her to the hospital. During her stay in the hospital, none of her parents or relations came to stay with her.”

He explained that trouble started when his wife refused to stay with his mother as culture demanded, adding: “My mother asked her to come and stay with her so that she could take good care of her but she refused the offer for reasons best known to her. In fact, she went further to insult my mother.”

Yusuf denied that he beat his ex-wife.

He said: “God knows I did not beat her. Instead, she held my clothes and beat me. I couldn’t retaliate because of her condition. It doesn’t make any sense for one to divorce his wife because she gave birth to three babies at a time.

In fact, since I sent her packing, I have been feeding her and the babies and I bought the medicine prescribed at the hospital. I have left everything to God.”(sunonlinereports)