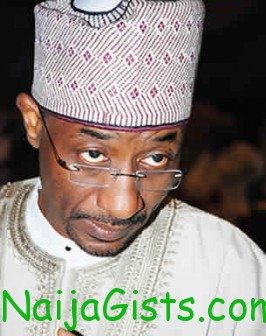 Sanusi Sack: The Height Of Political Corruption & Conspirary By The Cabals Running The Affairs Of Nigeria

In the African society, the royal stool represents the quintessential elements of our cultural values and tradition. It is everything noble and inspirational, capturing the unique essence of the people. The divinity of the ancestral stool defines the totality of the organisation of traditional system of governance.

Traditional institutions do not draw strength and validity from political office holders; whether it is the President of the country or governor of a state. The traditional stool is sublime and therefore, every authority within its jurisdiction should submit to it.

The dethronement and banishment of Alhaji Sanusi Lamido Sanusi, erstwhile Emir of Kano, is a clear evidence of assault on traditional institutions and whatever it represents. It is the height of bad politics gone awry, and corruption of all that is good and noble about our revered custom which Kano emirate typfies.

The royal stool being an ancestral symbol of authority over the dead and the living, when defiled and desecrated, brings about a curse of dire consequences upon the people and the society. The royalty of our traditional institutions predate politics as the first unit of organising the society.

Traditional institution is the embodiment of the values of a people which includes their entire world views made up of religion, governance, rites of passage, and taboos, among others. When culture and tradition come in contact with politics, its fountainhead of purity is polluted and corrupted.

What has just happened in Kano state is not a personal humiliation of Alhaji Sanusi, but a denigration and desecration of an age long tradition of the good people of Kano emirate. Our traditional institutions have been cheapened by political meddlesomeness and patronage.

Being rooted in culture and tradition, it is wrong to subject the selection of a traditional royal stool to the endorsement of political office holders who hands over staff of office to a would-be traditional ruler. To allow a politician to flirt with traditional stools is an anathema that poisons the well of culture.

To depose and exile a king is not something to be done lightly on the altar of political disagreement. It must be done with great circumspect in respect of the revered culture and tradition of the people which prescribes lay down procedures above partisan manipulation as we saw in Kano state.

It is now clear, to even to the very un-informed, that there is nothing cultural and tradition about the royal stools any longer as it is done at the pleasure of political office holders who use his whims and intuition as politics dictates.

We are not unmindful of the constitutional illegality of the act of the Kano state government that not only dethroned Sanusi, apparently within the law of the state, but exiled him to Awe village in Nasarawa State against the provisions of the constitution of the federal republic and the fundamental rights of the deposed king as a citizen.

A king can only be deposed for violations and desecration of the traditional stool and nothing more. It should never be done for the sake of perceived political differences.

It was the colonial brigands that introduced political dethronement and banishment of vibrant and fearless African traditional rulers that challenged their authorities like Oba Ovarawhen of Benin and Nana of Itsekiri; I think with historical reflection.

The Nigerian political elite in a bid to control everything that has life in the lives of the people and even to the air that we breathe would not spare the sacred traditional institution and its purity.

The whole world cherish the old British royalty which has endured for all times in its purity, even in the face of modernity of the 21st Century civilization without the Westminster political interfering under any guise.

African values have come under sustained siege by its own people and a rogue political elite bereft of ideological content and philosophy.

The waters of politics and tradition may flow in the same river, but their waters must never mix; a traditional stool should not enjoy its tenure at the pleasure of the political office holder like the governor or the president.

It is only in our own part of the world that a young state governor would gather traditional rulers together and talk to them as a headmaster talks to its pupils.

The sin of Alhaji Sanusi Lamido Sanusi is that he has been too visible and vocal, especially drawing attention to the state’s failures in the social welfare of the people thereby sustaining a religious practice that has become a threat to the well being of the society; the Almajiri culture, education of the girl child, and marriages that the establishment perceive as capable of weakening their hold on power if allowed to continue.

For Sanusi, the cerebral and quintessential banker and former CBN governor, it was just a matter of time that the sceptre would come over his neck. He is too urbane and iconoclastic to be a traditional ruler of such a conservative throne in a society that is reluctant to embrace progressive change.

Lamido Sanusi may have been brash to the political leadership in Kano state which he towers head and shoulder in intellect, morality and integrity. Here was a governor allegedly fingered to have collected bribe under camera.

Where is the moral high ground that the same governor is standing to dethrone Sanusi for whatever infraction? It is a shame that the good people of Kano have allowed this humiliation on their revered stool by a man who in every step of the way is like a highway robber.

Why would a people continue to tolerate and allow the destruction of whatever is of value and ennobling in its culture by rogues in political garb? The governor of Kano state may have had his way by getting a pliable candidate as his emir but history will judge him harshly for the irredeemable damage he has done to the culture of his people.

The absurdity of the whole drama of dethronement, banishment and detention has been denied by Kono state officials who claimed that the deposed emir was not detained when in actual fact he was taken under security escort to exile in Awe, Nasarawa State.

Sanusi is not known to be chicken-hearted by any means; he stands up to power and authority even at the expense of his office and pleasure when it matters. He remains brave though fatalistic as he has submitted to the illegal act of dethronement as the will of Allah.

Sacking of Sanusi is the height of political corruption and conspiracy by the amorphous cabal running the affairs of this country. It may have been over and out for Sanusi as a custodian of the traditional stool of Kano emirate, he may have been bruised and battered, but his head will remains high and has earned a place of honour among men of integrity more than his detractors who have sunk so low in everything noble.

For those who hold traditional titles in the different parts of the country to have gone on silent mode without standing up to challenge this brazen attack on our culture and tradition which go to the root of their own office;

it is a lost opportunity to assert their hold to traditional royalty of noble stools. There is nothing cultural and traditional about the royal stool any longer; it is gone

About the author: Mike Kebonkwu wrote from Wuse, Abuja.

Continue Reading
You may also like...
Related Topics:sanusi sack politics