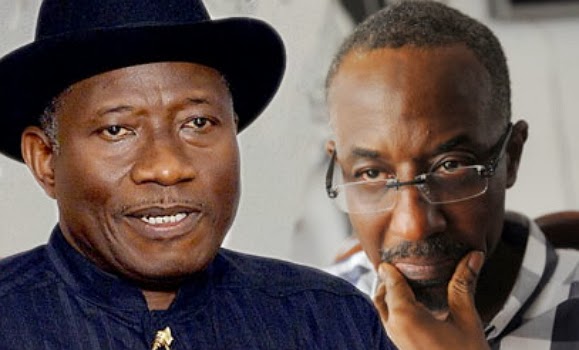 Mallam Sanusi Lamido Sanusi who was suspended by President Jonathan last week has sued him.

Sanusi who earlier promised not to go back to his job has changed his mind. He took President Jonathan before a Federal High Court in Abuja on Monday over his sudden dismissal from office.

Sanusi seeks to limit President Jonathan’s power over him.

The suspended CBN Governor urged the court to restrain the President, the Attorney General of the Federation and the Inspector General of Police from giving effect to his purported suspension from office as the Governor of the Central Bank of Nigeria, pending the determination of his suit.

He also wants the court to make an order of interlocutory injunction restraining the defendants from obstructing,disturbing, stopping or preventing him from in any manner whatsoever from performing the functions of his office as the Governor of the Central Bank of Nigeria and enjoying in full, the statutory powers and privileges attached to the office of the governor of Central Bank of Nigeria.

In the suit filed on behalf of the ousted CBN boss by his lawyers led by Chief Kola Awodein, a senior advocate of Nigeria, Sanusi told the court that his interlocutory application is necessary because of the issues raised in the suit and that delay may likely entail irreparable and serious damage and mischief on him in the exercise of his statutory duties as the CBN Governor.

He urged the court to exercise its discretion in his favour by granting the interlocutory injunctions as the President’s continuing unlawful interference with the management and administration of the apex bank, unless arrested, poses grave danger for Nigeria’s economy and justifies the court granting his application which will result in maintaining status quo ante bellum, that is, for his return to his office as the Governor of the CBN.

In the affidavit deposed in support of his application, the suspended CBN boss averred that in the course of his duties as the CBN Governor, that he discovered certain discrepancies in respect of amounts repatriated to the federation account from the proceed of crude oil sales between the period of January, 2012 and July, 2013 and that he expressed concern in respect of the said discrepancies and had cause to inform the National Assembly of the said discrepancies because theyy affect the revenue of the federation and the national economy.

He further stated that the actions of President Goodluck Jonathan, in purporting to suspend him from office, is aimed at punishing him for these disclosures.

He also stated that he is challenging the President’s power to suspend him from office noting that the President did not approach nor obtain the support of the senate, based on his discussions with several senators, including Senator Bukola Saraki.

“I have been informed, and I verily believe the information given to me by Senator Bukola Saraki to be true and correct that the senate did not give the President any support for my purported suspension and removal from office as the Governor of the Central Bank of Nigeria”

Sanusi further stated that the actions of the President in suspending him from office is contrary to provisions of the Central Bank of Nigeria Act relating to the appointment and removal of the CBN Governor and that his purported suspension amounts to unlawful interference in the administration and management of the apex bank and is illegal, null and void and urged the court, in the interest of justice, to grant his reliefs.

Sanusi’s lawsuit case is still at Abuja Federal High court. The case is yet to be assigned a judge for hearing.

On Monday night during the Presidential media chat, President Jonathan said he has every right to suspend the Central Bank Of Nigeria’s Governor.

Jonathan said his power is absolute.