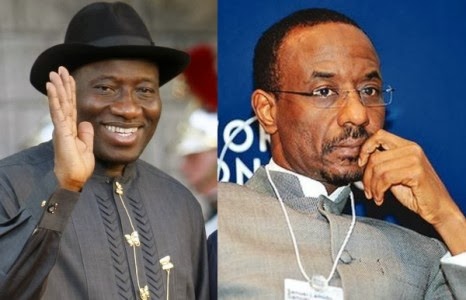 There is little left denying that Reckless and Incompetent are two words that absotively and posolutely define the Goodluck Jonathan regime. It is quizzingly disturbing however that a few remaining diversionists insist on the Straw man fallacy argument, raising the issues against the person of Sanusi Lamido Sanusi (SLS) in the June, 2013 FRC report in attempt to stall the national urgency of a motion to impeach Nigeria’s president.

The topic on the minds of Nigeria’s millions of destitute and poor and on the minds of global observers concerned about Nigeria is how a nation of 168 million intelligent and hardworking hopefuls cannot know where $20 billion or more is. There is no question about this. This is not disputed. Nigeria’s government does not know where $20 billion is. The Finance minister has admitted in unambiguous terms that she expressly does not know where $10.8 billion is and again where the entire $20 billion is. This fact, first realized at the end of the reconciliation meeting was again submitted by the Minister of Finance and the Economy, Ngozi Okonjo-Iweala in a BBC press release on February 25th, 2015. Quoting the BBC in the article “Nigeria’s finance minister puts pressure on Goodluck Jonathan:”

“My position on this has been clear from the start. The Ministry of Finance’s reconciliation showed a shortfall of $10.8bn in NNPC remittances to the Federation account. After this, the conflicting claims continued with new figures such as $20bn being mentioned.

In any decent and democratic nation, such a submission by the Minister of economy and request for forensic auditors would be followed responsibly by a letter of retirement. If not, a competent and well-intended President of any progressive nation in the world would have been compelled to do the honors of immediately dismissing the Minister for dangerous admission of incompetence. We do need a forensic audit, and only so, because our Finance department is woebegone. If you cannot do your job, to the tune of $11-20 billion, your way is the door. This is what should be and what would be in any civilized nation. You will even get death in no-nonsense China. The retaining of the Finance Minister after this admission is reason #2 why the President of Nigeria should urgently be impeached. This cannot be overemphasized. Reason #1 for the President’s sack of course is the initial issue of missing billions (USD). These matters are serious. Our nation is not a joke. Mismanagement and embezzlement are directly responsible for the terror that wipes away our citizens north and south. At this critical stage in Nigeria’s history, after 50 shabby years, what we need is vision, intelligence, strength, discipline and diligence. A public commentator noted that ‘Jonathanians drop the bar of competence and responsibility so low that famous robber, Lawrence Anini could scale it eyes closed.’ When do we start recovering from the plundering of most of our 50 years? After another 50 of gravid plundering?

It is noted that the same people who supported the retaining of ex-Aviation minister, Stella Oduah, caught red-handed stealing millions, are the same people who seek every diversion to the urgency of the national embarrassment of missing billions, ‘gone to fund terror.’ Clarifying the reason missing billions funds terror: to protect loot, whoever need be appeased or bribed is bribed easily with stolen national commonwealth and this makes looted money the chief source of income for wicked characters like terror sponsors.

Another public commentator wrote an article stating that we can walk and chew gum at the same time, in reference to the case against Sanusi. I take this to mean, we can walk in pursuance of the nation’s missing billions and also chew the gum of Sanusi’s ‘crimes,’ at the same d.a.m.n time.

It was with disappointment that I read an article published February 25th, 2014 in PremiumTimes from respected author, Femi Aribisala in which he occupied the column lambasting sacked CBN governor Sanusi Lamido Sanusi (SLS).

He is welcome to the club, rather late, in 2014. Many of us have written critically of SLS since years passed. SLS is a system man, of course he is. He has been part and parcel of the administration. There is no doubt about this and no one has claimed otherwise. Unlike the #OduahGate case, you do not see any one of us writing and publishing in the defense of SLS, explaining why he must be forgiven. No. All we progressive Nigerians have done is said—as it is for Sanusi so it shall be for Mr. President. We have also poked all obvious holes in the report levied against his person so far and the timing of the release and suspension of Nigeria’s Whistleblower and chief ‘witness’ in the case of the missing billions (USD). They should submit better. In any case, SLS is an adult, he can and will defend himself. His case has nothing other than as a tool of malicious diversion, to do with the pressing case of missing billions.

By suspending SLS at the height of the scandal, whatever investigation is done is now meaningless to Nigerians. We Nigerians shall not take the results of so-called audit or investigation. It will be purely ‘Government magic.’ Suspending SLS in the middle of the reconciliation is an admission of guilt and conspiracy to cover-up. “Money no lost, dem go shout again,” in the words of late Fela.

Unlike what was written in this article and what has been proposed by the few Jonathanians/GEJites. SLS did not mis-present facts. He did not change figures. He did not ‘scream to the world that $49bn was missing.’ SLS diligently submitted the total queried to the President in private. The President ignored this for months. It was later that somehow this leaked to the public. God bless the leaker. Had GEJ attended to the private memo when first sent, reconciliation may have been concluded in private, but our arrogantly reckless leadership could not be bothered, and this is why the public knew and this is why SLS apologized. Not for being wrong, but for us knowing and being unduly aggravated about a yet on-going investigation. After a hasty reconciliation, both parties agreed $10.8 billion was missing. After crosschecking, SLS had to blurt out that reconciliation was ‘full of garbage,’ $20bn was yet clearly unaccounted. To show how the reconciliation is packed with lies, just take a look at Vanguard of 24th February and 25th February, “We never received $6bn from NNPC, NPDC insists” goes one caption. This is the type of material SLS was given at reconciliation. Material that crumbles on cross-examination.

I am tempted to say that those who attempt to obfuscate, and raise and compare the case from a report done since June 2013, of incidents protected by the GEJ government since 2010 are either benefactors of the missing $20 billion, or transiently under the impulse of puerile hormones.

If this report was actually presented since June last year, what took the President so long to fire SLS? This ridiculous and dangerous delay is reason #3 for impeachment. If truly he diverted Nigeria’s income to the tune of billions of naira… and Goodluck Jonathan knew and kept him for several more months as head of the apex bank?

Secondly, if indeed as the FRC report suggests—not minding all the holes that have been poked in it—that Sanusi Lamido Sanusi had been diverting funds since 2010! Was there no oversight? Why did Nigeria not know since 2010 that SLS was diverting such funds? Is this the nation and government we want? Where thieves can divert billions of naira in frivolous expenses and there is no control and oversight of it? This is reason #4 for the urgent impeachment of President Goodluck Jonathan. Nigeria is not his personal botanical or zoological garden. We are not id!ots. We know exactly why SLS was fired now. We know the games and we assure the President and his remaining 43,998 supporters that this is the last time they will play these shameless games. #WeNoBeMugun!

It is important to remind us that SLS was not elected into office by us, he was nominated and appointed by the Goodluck Jonathan government, albeit during late Yar’Adua’s half of it. The ‘failures and corruption’ of SLS are the failures and corruption of GEJ. If Sanusi should go to Kirikiri, Jonathan must and shall lead the way and warm the cell for him. This is not in defense of SLS. Call SLS a thief, that’s your prerogative. It takes a thief to catch the biggest thieves, Kerosene subsidy wicked thieves who steal N100 from every mother in Nigeria per litter… stealing billions (USD), we thank him. In fact we can give him a Presidential pardon under the new administration after these economic terrorists who stole more than half of our annual budget are sent to the gallows. As mentioned earlier. He is an adult and can and shall defend himself.

This matter adds to the reasons why the world is fed up with this President. For his retaining and presenting a retirement vs a sack of Stella Oduah, the other thief, he should also be impeached. This is reason #5. The President of Nigeria as protected by a handful of fanatic supporters and careless authors is insulting the hard work, prayers and commitment of many Nigerians who have contributed to the protection of the constitution and preservation of a sense of decency in the government. The media exposed Stela’s theft, not the EFCC; where is the reward and salary for the media for doing this? The defenders of Jonathan would accept/defend N5 billion to the media for the monumental task of exposing Oduah, a job the EFCC is paid billions to not do. That’s the way they think and the ridiculous stuff they defend, once there is a big office or huge title to the thief/usurper. After such expose, at least we should have been dignified with her sack and imprisonment and not insulted by her having a dignified retirement. But no, after all the nation’s time it wasted, all he did was give her a dignified self-retirement and left Coscharis free.

Sycophancy and lickspilttling is killing many of us. We will readily pursue and burn a person who stole a biro to death, but when it is a cabal, we say, ‘he is doing well, he built a leaking airport, or tarred a road already again pothole riddled.’ The mad of us are more eager to run after Sanusi for a few suspected millions (USD) than pursue the higher-up greater thieves, drunken men and women of the GEJ administration that have admitted/confessed they have ‘misplaced’ our billions and indignantly that they steal some billions (USD) in the Kero-subsidy fraud.

These are the issues that should be on the table in Nigeria. The way the country is being ruled like a kindergarten with hopeless incompetent and inebriated administration of the executive arm.

The more ‘crimes’ that are revealed about Sanusi serve only to compound the crimes of the Goodluck Jonathan administration for which impeachment is way past due. That a motion to impeach has not yet been pushed reveals the worthlessness of the nation’s lawmakers, of all parties. A motion should have been submitted, regardless of the possibility of it passing. Why should Nigeria claim it has a democracy and only practice the money embezzling aspects of democracy and not also practice the checks and harsh balances it proffers? Obama as super as he is has had such motions raised against him.

There is really nothing to discuss here, it is unbelievable we even still talk about and define theft and the expected repercussion of grand mismanagement. This matter has been over thrashed. #WhereIsOurMoney?

Continue Reading
You may also like...
Related Topics:jonathan, sacked, Sanusi