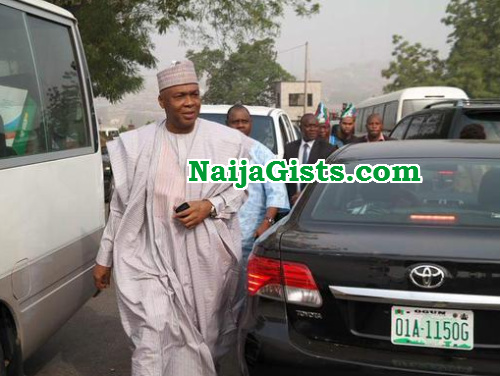 Few hours after the CCT ordered his arrest for refusing to show up in court today, the senate president has come out of hiding.

In a statement released this afternoon, Bukola Saraki promises to show up for his corruption trial in Abuja tomorrow.

” The Senate President is a law abiding citizen and his absence from tribunal was based on legal advice he received from his counsel that it is not necessary for him to appear before the tribunal at this stage since the jurisdiction of the tribunal and the process of initiating the matter are being challenged before the Federal High Court Abuja.

” Following the adjournment for the determination of the motion on notice and the substantive suit before the Federal High Court to 30th of September and the appeal pending before the Court of Appeal adjourned to the 29th of September 2015, the Senate President has decided, as a law abiding citizen, to appear before the Tribunal in the interim.

” Dr. Saraki has taken the decision to attend the Tribunal sitting to demonstrate his respect for the rule of law in spite of his personal reservation on the process of his trial and the purpose it may be intended to serve.

” Dr. Saraki wishes to assure Nigerians of his absolute belief in the judicial process and is therefore confident that the course of justice would be served at the end of this matter,”.

Saraki why u dey run?