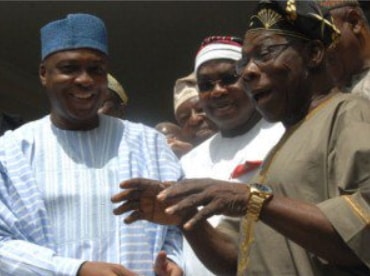 Saraki who arrived at the Olusegun Obasanjo Presidential Library around 5:27pm today left at 7:12pm.

He declined political questions by reporters as he made his way out of OOPL.

Last week, he met with ex President Ibrahim Babangida at his Hilltop Mansion in Minna.

According to sources, Saraki’s main purpose for the visit was to apologise to Obasanjo for missing the inauguration of his Presidential library.

Since Saraki has bit the finger the fed him, he needs the support of powerful men like Obasanjo to amount to anything in the PDP party.

He is not called the Chameleon of Nigerian politics for no reason.

The smart politician knows how to play his game well.

Continue Reading
You may also like...
Related Topics:begs, obasanjo, saraki