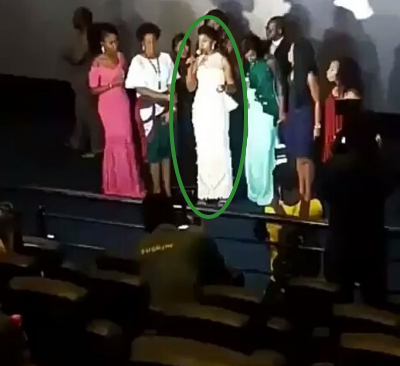 Nollywood filmmaker Omoni Oboli has been forced to cancel her upcoming movie premiere in Lekki yesterday after she was served court injunction following a lawsuit filed by scriptwriter Jude Idada.

Idada filed a lawsuit in Lagos this week after accusing Omoni Oboli of stealing his script.

Omoni Oboli was in tears last night as she called off the premiere of her highly anticipated movie.

In an emotional speech, the visibly shaken mother of three said the script is 100% hers.

Her fans will have to wait until she settles the legal mess before announcing a new date for the premiere of Okafor’s Law.

Watch her announce the cancellation in the video below:

Omoni Oboli was aware of the copyright infringement allegations before planning the premiere of her movie. She should have waited to sort this out before wasting money on it.

It is high time she gets herself a good legal adviser so as to prevent embarrassment like this.