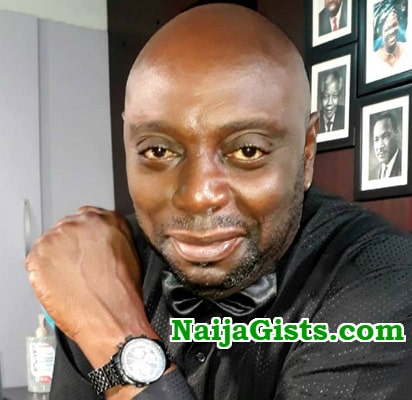 Last year you disclosed your intention to go into politics. What is the situation now?

My brother I don’t want to go into that…

Have you changed your mind?

It is not a matter of changing my mind. For now I think I should just let sleeping dog lie, and just observe. When I think it is right, I will make a categorical statement about that. But for now, I want to face my career as an actor, an entertainer, and see where it takes me to. For now, I have bigger things that I want to do; I have projects that I want to do. I want to concentrate big time. This is serious business, so I need to focus on it.

Did you really set out to become an actor or was one those happenstances?

It started when I was in secondary school in Edidi, Kwara State. I met a friend, Ayo Orowale, in Ilorin. He heard my voice and he thought I could make a good actor. We went on to do Transistor Radio, a play by Ken Saro Wiwa. We had Randy Ojuolape, who was working with Kwara State Council for Arts and Culture, in that performance. Then we started a group called Palm Players; we believed that we could do something. Later, I started appearing in NTA Ilorin. I was still in secondary school then.

We were doing Youth Scene, singing and acting. Abdul Durodola was producing for NTA Ilorin way back then. After that I came back to Lagos, before I went to University of Ife, now Obafemi Awolowo University (OAU), where I studied Dramatic Art. I trained under Chuck Mike. It was Dr. Bayo Oduneye who, after watching my performance in Marriage of Anansewa, encouraged me to go and study Dramatic Art at Ife.

Also, Anansa Playhouse led by the late Bassey Effiong was there at the National Theatre complex. I must say here that Bassey Effiong was not just a director; he was a teacher, a good teacher. He taught me, not just me, all of us who members of Anansa Playhouse then, the rudiments of the theatre. So when I went to Ife to study dramatic art, it was easy because most of what he had taught us were what I encountered in Ife. I have no regret having to dabble into theatre; I have no regret at all. I knew for sure that it was something I wanted to do, though my late father wanted me to be a lawyer.

Was your father angry when you decided to be an actor?

No, he was not. It was just that there was one night he woke me up to see myself on NTA. They were using me for promo on NTA Ilorin, and he said if that is what I wanted to do, fine, but that I should make sure I get educated.

How was your experience with Anansa Playhouse?

Anansa Playhouse was one brilliant playhouse that, for me, was like a foundation school into theatre. Like I said, Bassey Effiong was a great teacher and theatre director. He was somebody who took his time to talk to you, train you. I am talking about acting on stage – different positioning on stage, speech patterns, diction, pronunciation and so on. When we came for rehearsals in those it was always like a school; it was like a lab, a theatre lab. We had the likes of RMD, he had a stint with Anansa Playhouse, the late Funsho Alabi, the late Mike Odiachi, Ofoafor Otemewo, Roland Henshaw. We had quite a number of people. We staged the Wole Soyinka’s Lion and the Jewel.

It was produced and directed by Bassey Effiong. I played the role of Lakunle. It was very interesting. We also went on to do an adaptation of Chinua Achebe’s Things Fall Apart for stage by Bassey Effiong. It was the first time it was adapted. I played the role of Obierika. Like I said, Anansa Playhouse was like a theatre lab of sort, for youngsters then. The kind of benefit that we got from Anansa Playhouse up to when I got to Ife, was tremendous. I don’t think we have this kind of training these days. It was intense; it was qualitative. So when you sit back now and watch most of these young talents you just laugh. It is a welcome development the kind of transition we’ve had. At least people now believe in their business. In those artistes were seen as ragamuffins, rascals, never-do-well. But look at what it is today. Everybody wants to be an actor; everybody wants to be in the entertainment industry.

How can the young ones develop better in Nollywood?

By studying very well, by understanding what the industry is, and knowing that it is not an all comers affair. It is not something you just dabble into because you think you have talent. You must go beyond having the talent; you must be disciplined, and understand the polemics of the business. It goes beyond that. It is a profession. It is not a part-time job.

What is the difference between Nollywood then and now?

Then, it was a bit tough; it was not easy. But now it is tougher and harder, because the scales have falling off people’s eyes. So when you say you want to do a movie you have to first count the money; what comes to you at the end of the day is what you think about. In our own days it was about getting it right first.

But now, everything has changed; it is about putting more money into the business if you want to grow. The kind of things we used to do in those days everything has changed – there are better equipment, better facilities now, and the directors are very daring; some of the actors are also very daring. Also, marketing, publicity is becoming more and more intense. Cinema houses are springing up, though not enough yet. So, we still need to work more; there are still a lot to be done. And the international community has come into it. We’ve gone global.

Are your kids into acting?

Tell us your most embarrassing moment…

It was not funny. I was trying to get inside a car and my trousers split. I could not come out at all. I had to sit in the car then tell the driver to take me to where I was going. And when I got to where I was going, I had to call my people in the office to get me something to put on. Luckily it was very early in the morning. I was going to work. Actually I’ve had so many embarrassing moments, but you just have to live with it.

You have two albums to your credit so far. What happened to the music aspect of your career?

Well, you do some certain things and you let it go. Maybe my kind of music was just too advanced at that time.

What kind of music?

That is kind of music that Timi Dakolo is playing now; that is what Dare Art Alade, Banky W are playing now. It was not as if I was discouraged but I was a bit tensed up with the contract.

What is your view about collaboration between Nigerian and Ghana stars?

Very great, but it has been at its lowest ebb of late. In recent times it has really come down. I guess they decided to go back and grow their own industry because we have also grown our own industry too.

What is your opinion about the fight against Piracy?

I think we are all just paying lip-service to the war on piracy. And it is getting worse now there are so many downloads online; social media has made it very difficult. There has to be the will to do it. If you look at the law on piracy now, the penalty is more like a pat on the waist. So we need stringent laws to tackle it, enforcement is critical.