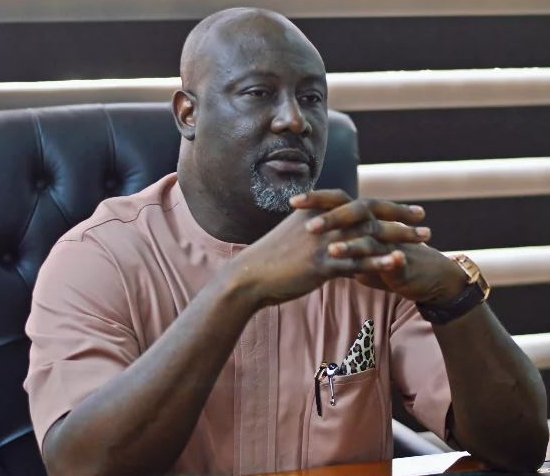 The Honourable Senator Dino Melaye is rarely out of the spotlight these days – mostly for all the wrong reasons. His uncouth and brash comments and sometimes erratic behaviour have led to questions about his suitability as a Senator.

The word ‘Honourable’ that precedes ‘Senator’ is meant to refer to someone of impeccable standing in the society; someone who is highly respected and revered as a Senator, a member of a government body that makes laws. However this doesn’t seem to describe Senator Melaye. To be quite honest one simple word sums him up – agbaya! You can’t keep on acting like a child and expect people to take you seriously. Ditch the comic act! Whatever did the people in Kogi West see in him when they voted for him?

The Senate is not a place for an individual to display comical theatrics. It’s a serious environment where people sit to plot the future path of the country. But yet again there are other clowns in the senate who go there to sleep or advocate child marriage!

In his first incarnation as a clown he threatened to beat up and assault his fellow Senator, Mrs Remi Tinubu. And to intimate her further he actually flew down to Lagos to pose for photographs near her residence! In a more civilized world he would have been arrested for threatening behaviour and stalking!

In a sane world any responsible politician would have shown actual copies of their degrees and graduation photographs to quell any rumours. But not our esteemed Senator. He had to drag it out ; turning up in the senate wearing a graduation gown, threatening to sue Sahara Reporters before finally dragging the ABU VC to the senate to confirm that he did graduate from ABU with a third class in Geography.

Even though some still question his claims, especially since anything can be bought in Nigeria, it beggars a simple question – why all the theatrics over a matter that could have been resolved in a more dignified matter?

And to take his theatrics even further he actually took to YouTube to give a rendition of aje ku iya nio je….to taunt his ‘haters’! Agbaya ! Well if the day job of a Senator doesn’t work out he can always become a performing comic and singer!

Now, according to him, he’s just survived an attempt on his life when ten assassins, guns blazing, stormed his house. Is this true or is it another one of his attention seeking stunts?

The matter is currently under investigation.