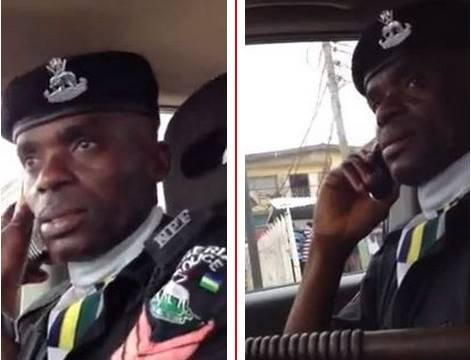 Another man in uniform has been dismissed by his oga at the top.

The police officer caught on video negotiating bribe with an unidentified motorist has been dismissed from the Nigerian Police Force.

The identity of the police officer was released yesterday following his dismissal.

Chris Omoleze got into trouble after the driver he stopped took a secret video of him negotiating bribe with him at Murtala Muhammed International Airport in Ikeja, Lagos.

Nigeria’s Inspector General Of Police, Abubakar who ordered his arrest dismissed him yesterday.

The ex-police officer with force number 192954 was crying when he was handed his dismissal letter. He blamed his action on the devil.

This will serve as a lesson for others who are bribe addict.