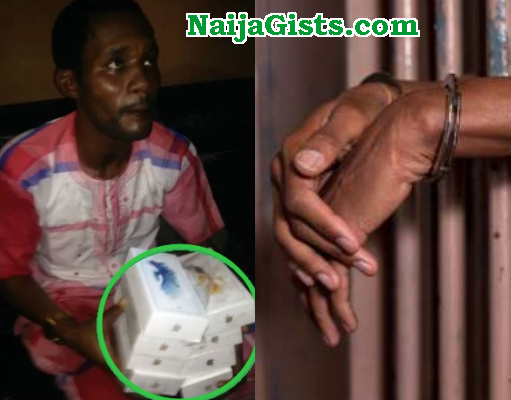 Popular Nigerian filmmaker Seun Egbegbe is currently cooling off in Kirikiri prison over his inability to fulfill his bail conditions.

The ex-lover of Toyin Aimakhu got in trouble on Tuesday after he allegedly stole 10 iPhones from a shop at the Computer village in Ikeja Lagos.

He was arraigned before a Magistrate Court in Ikeja yesterday and charged with one-count of stealing.

He was granted bail in the sum of N1million and 2 sureties in like sum when he pleaded not guilty.

The Presiding Magistrate Aje Afunwa ordered him remanded in Kirikiri prison pending the time he would perfect his bail conditions.

As at last night, no surety came forward to rescue the embattled film maker.

His case will come up for hearing on the 8th of February 2017.

Meanwhile a serious drama happened outside the court premises yesterday as some area boys threatened to beat up any journalist who dared snap the photo of Egbegbe in handcuff.

Peace was restored to the area when some soldiers were brought in to chase out the hoodlums from the court premises.

While journalists while waiting to take photos, his family members in collusion with prison warders sneaked him out of the court room into a waiting door at the back of the court house.

He is currently in Kirikiri as family members hunt for two responsible individuals who could stand as sureties for him.

An insider said Mr Egbegbe is likely to regain freedom today Friday the 25th of November 2016.

Check out the video evidence of Seun Egbegbe’s arrest below