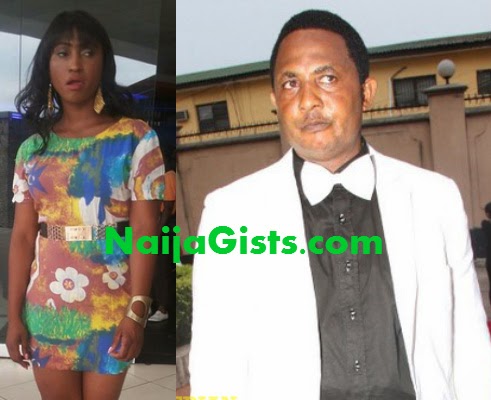 Dec 13, 2014 – Seyi Hunter: Collins Onwochei Is A Fraudster, He Wanted 30% Profit From My Movie & Forced Me To Sign Contract

New Nollywood movie producer Seyi Hunter has accused actor Collins Onwochie of cheating her out of a movie deal.

Seyi Hunter said the actor manipulated her into signing a contract that will enable him to take 30% of the proceeds from her upcoming movie.

According to Hunter, as a greenhorn in the movie industry, she needed an established act to help her ‘coordinate’ cast and crew for her debut movie. And as such, she sought the help of Onwochie, not knowing that would be her undoing.

While speaking to Saturday Beats on the phone, the budding producer-cum-actress said she entered into the movie deal with Onwochie ignorantly without signing any contract. She said she had offered to pay Onwochie N150, 000 for his troubles but the actor refused and demanded his money in percentage.

“But I refused. He even suggested we do a cinema movie and I told him I wouldn’t do that. I told him I wasn’t going to pay him in percentage as well. He said I shouldn’t worry and that we should continue with the shoot.”

Hunter said Onwochie also squandered a “reasonable amount of money” she gave him to pay the cast and crew.

“He didn’t pay more than 80 per cent of the people that worked on that set. He just paid two of the actors part of their fees. He told them I didn’t drop money for the production. He didn’t pay the crew members.”

But not paying the cast and crew is not the major issue Hunter is facing as she said the actor threatened her and made her sign some documents under duress.

“I had wanted to collect my ‘rushes’ (unedited copy) from him but he refused to give it to me. He said he would get an editor to edit the movie for me and I insisted I had my own editor. It took the intervention of a senior colleague before he agreed to give me the ‘rushes.’

“He eventually called and said I should meet him at TBS. I went there and met him with two other men. I don’t really know the men even though I had seen them with him before. There, he brought out a contract and said I should sign it. In the contract, he wrote that he owns 30 per cent of whatever I make from the movie. I laughed and told him it wasn’t possible. How should I give him 30 per cent of what he didn’t invest in? He insisted he wanted that or nothing. I reminded him that I wanted to pay him N150, 000 as the coordinator but that he refused and said he wanted his money in percentage. I eventually told him that since we sell to different marketing companies, I would pay him 15 per cent of the money after I would have removed my capital. He said it was too small. When he suggested that we should take the movie to the cinema, I told him I wasn’t doing that. I repeated my willingness to pay him N150, 000 which I offered initially.

“He held the ‘rushes’ in his hands and said, ‘this is your rushes’ but I will not release it until you sign this contract.’ He and his friends threatened me and insisted I must sign. I did but I didn’t sign my real signature. His friends signed as witnesses. I had to go and meet a lawyer who said making someone to sign under duress is illegal. People have been asking me why I had to even contact him in the first place.”

When contacted Onwochie on the phone to get his side of the story, he said he was surprised Hunter would go this length to discredit him.

“This young lady has gone around town spoiling my name when indeed what I did for her deserved praise. Producing a film she intends to show in the cinema with less than N700, 000? I’m short of words but calm. You need to see all the expenditure, things that weren’t budgeted for and a few remaining cast not paid.

“What is my crime? I’m still in shock. I was contacted and begged to produce for this lady because she has been a friend, and we both agreed I’d have 30 per cent of all profits from this project after her investment had been removed. Why all the slander now that the job is completed? It’s really a shame how people change for the sake of money or credit.

“Till this minute, this young lady sees me every day, says hello nicely but goes behind me to sell lies and tales around. Haba! But it is well. Every kobo spent is documented, but still, the slander goes on, to what end?”