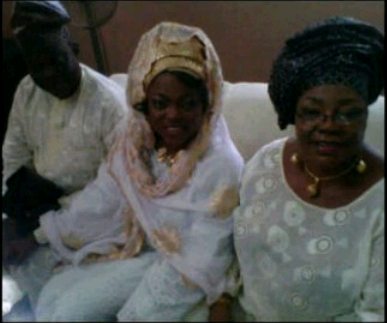 Hello my fellow Nigerians before you criticize me in any way please take some time out to understand the content of my article first.

Nikkai is an Islamic wedding right to bless the marriage, it also involves signing the marriage contract – to practising muslims, avoiding this right makes the bride a mere concubine which also involves Shahadah taking.

A Little About Shahadah

After having decided to revert to Islam, one must sincerely utter a testimony called Shahadah.

The Shahadah consists of two parts.

The Shahadah is not necessarily to be said in Arabic, though preferable. One may say the Shahadah in front of two witnesses, but one should not delay the testimony. It is preferred that after taking shahadah, one takes a bath.

The shahadah reads as follows:

After taking the shahadah, one must start the way towards God by following the five pillars of Islam.

Contrary to some confused folks out there claiming she is still a Christian, her official conversion to Islam that took place yesterday coupled with name change earlier in this week is an indication that she has renounced Christ.

Funke Akindele renounced Christ when she took the Shahadah taking on the muslim name of Khadijah in the process. (Article by Bolaji Obe).

Editor’s comment: The opinion expressed in this article doesn’t necessarily reflect that of NaijaGists.com.