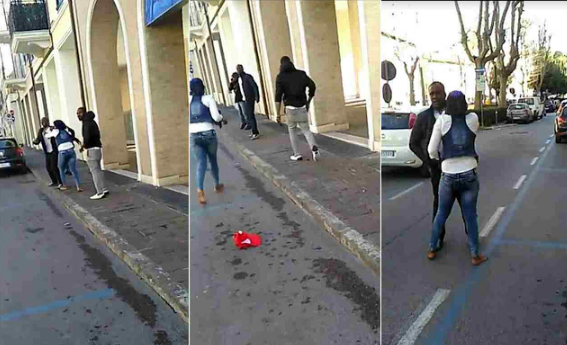 April 6, 2017 – Shameful: Nigerian Lady Caught On Video Beating Her Boyfriend On The Streets Of Italy Over Money

This Nigerian lady threw caution to the wind when she descended on her boyfriend on the streets of Italy.

The lady from Benin city Edo state was seen shamelessly slapping her boyfriend who brought her to Italy while cursing him out.

Those who shared the video on the social media alleged that the lady had been lying to her people in Nigeria that her boyfriend is fond of raping her.

This video was recorded to proof to her people in Nigeria that their daughter is a tigress.

This is totally wrong!! Haba see how she is slapping him like a nobody.