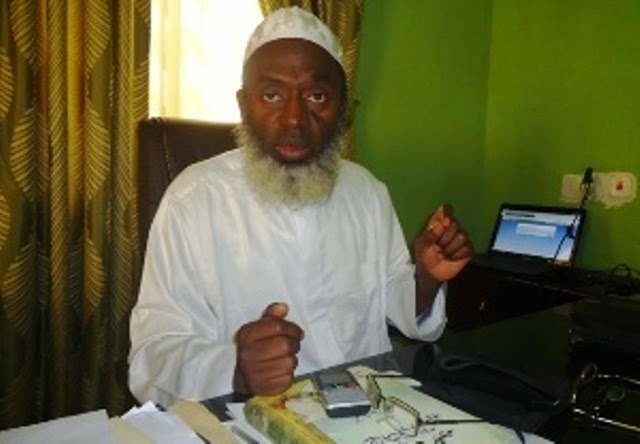 Gumi questioned the constitution that permitted Jonathan to serve more than 8 years.

He also compares GEJ to Ebola and says citizens’ vote will determine if Nigeria is fit to be declared Ebola free.

My wish was that reason will prevail and the nation will heal by primary intention but it’s evident that we are going to heal with scars. A patient that recovers from Ebola infection is secured from being re-infected and better adapted than one that took sanitary measures not to contract the disease in the first place.
Nigeria after the infection, by God’s will shall overcome Ebola, coming out stronger and fitter for survival.

The first sign of good prognosis is that 2015 elections will hold. The president’s acceptance to run in the elections, his endorsement by Senate president and the change in House of Representatives puts a rubber stamp on the Election as the only possible way Nigeria can be governed legally beyond February 2015.

We can understand now, how time and money were spent uselessly in attempts to alter the constitution back door, how lives and properties were lost uselessly to create a false artificial sense of insecurity. We are now rest assured at least there are no more plans left and elections will hold.

What no two people will argue about now is that a portion of Nigeria though relatively very small is directly under Boko Haram administration regardless of whether they are playing a larger international or national script or they are on their own.

A straight convoy of few armored vehicles interspersed within a swamp of motor cycle riders all numbering less than 2000 fighters or slightly more taking villages after villages is a symptom of an artificially doctored failure.

One attack helicopter with air to ground missiles would have been enough to halt them and annihilate them. But nay all the years the military strategy was focused on one target to be protected at the price of even losing everything. The Eagle square and what it represents.

The C-in-C asking for re-election at the very moment the nation is crumbling after almost four years of serious security inadequacy. Not only in NE but Nasarawa, Taraba, Zamfara, Southern Kaduna etc.

Another good omen is the demystification of our military and secret services. Videos of soldiers scrambling for their lives with civilians running out of territories overran by Boko Haram. This imperatively calls for the total overhaul of the security outfit for the next government. No more place for nepotism, mediocrity and victimization. As our military today is not ready to die for what Nigeria has became, the same military should not kill Nigerians for the same reason. They should resist being used in elections.

Another good sign is the litmus test of our judiciary. Does the constitution allows a person to be president for over 8 years of regular administration? Can a person be sworn in as the president three times?

Another good sign of progress is the opportunity for I.N.E.C, APC, and peace loving Nigerians to demonstrate that there are still sound minds in the nation.

I.N.E.C though seriously underfunded has instituted electoral changes only a foolish populace and an irresponsible opposition can be outsmarted. In that case they don’t deserve to rule anyhow.

The opposition should field a candidate with a wider national appeal. It’s a stage of crisis management. Calming frayed nerves. There is no room for radicalism and acrobatic stunts of political immaturity.

Almost every Nigerian is tired and needs a change but if the wrong choice surface the status quo for many will still be better.

The groups that needs to be made extra comfortable are the Christian voters, the Rich and Business class, the traditional class and the SW. As for the masses most especially the Northern Muslim they will vote anything and I mean it, anything that will bring change from the status quo.

The good peace loving Nigerians have the final say.

You are either a police man guarding the ballot boxes or an I.N.E.C official or a party official or an independent observer or an ordinary voter. You are all at the local level and the direct victims of neglect and mis-governance. Make sure votes are counted and the result sheet made public. That’s all and nobody can steal or conceal your rights.

You still have Governors, senators and representatives to elect. Your wise choice this time of these elected officials is all that is needed to declare you Ebola free.”