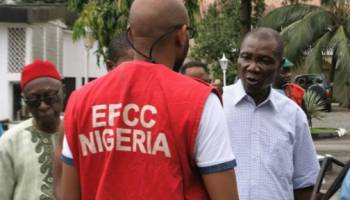 The EFCC has arrested one Saheed Omoniyi over alleged N11 million fraud perpetrated through the Internet.

Mr Ayo Oyewole, the Head of Public Affairs, EFCC Ibadan Zonal Office, told newsmen in Ibadan on Thursday that Omoniyi, 24, lured his victims to defraud them by posing as a renowned Islamic cleric.

He said that the suspect had impersonated a popular Lagos-based Islamic cleric, Sheikh Sulaiman Onikijipa on the internet seeking donations from his unsuspecting followers.

Oyewole said that the suspect had lured the unsuspecting followers of the popular cleric to pay donations into an account purportedly opened by the Sheikh.

He stated that the commission got wind of Omoniyi’s fraudulent activities through a petition sent to the anti-graft agency by the Islamic cleric.

Oyewole stated that the commission’s investigations revealed that the suspect had obtained over N11 million before his arrest on Monday, March 13.

He said that the suspect was arrested on his way to the bank to withdraw the latest donations of one million naira into the fraudulent account.

Oyewole stated that Omoniyi, who hails from Offa in Kwara State, had made a confessional statement to operatives of the commission.

He said that the suspect would be charged to court as soon as the investigation was concluded.