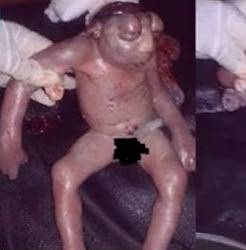 A 36-year-old woman identified as Precious Nyathi recently delivered a baby looking like frog in Zimbabwe.

Due to the shame and stigma attached to having a frog-like creature as baby, Precious Nyathi’s husband, 39-year-old Nomore Nyathi advised them to keep the baby at home for several days before residents broke the news to a local leader who called police to intervene.

The traditional leader reportedly got authorization from the police before ordering the couple to burn down the malformed creature which had shrunk in size.

The creature was set ablaze before a stunned crowd in Gokwe area of Zimbabwe.

The mother of the deformed baby described her experience as hell on earth.

Continue Reading
You may also like...
Related Topics:frog baby zimbabwe, photos of frog baby in zimbabwe, woman gives birth to frog in zimbabwe