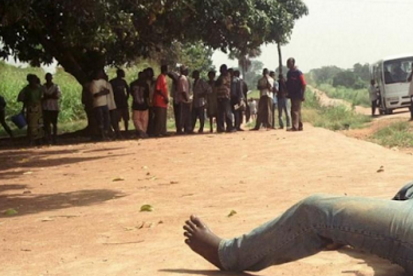 The Ebonyi state Police Command today confirmed the arrest of a 30-year-old man suspected to have killed his two-year-old daughter in his farm.

The command’s spokesperson, ASP Loveth Odah, told NAN in Abakaliki that the corpse of the girl had been taken to Mgbo Hospital morgue.

Odah said that investigations into the matter had commenced.

She said that the suspect, a native of Ukwu-Agba Mgbo in Ohaukwu Local Government Area of the state, would be arraigned immediately the police completed investigation into the matter.

“The act is condemnable and more regrettable is the high rate of brutal killings in Ebonyi.

“The suspect will soon be arraigned,’’ she said.

Odah added that the command would bring to book all perpetrators of heinous acts in the state.

A source close to the family told NAN on the condition of anonymity that the suspect killed his daughter in his farm on Sept.6 and the act was detected by a good citizen.

“The good citizen reported the matter to the Ohaukwu Police Division which arrested (the man) and recovered the girl’s corpse.

“The family and the community suspect that the act was for ritual purposes because he used his machete to cut the girl’s right leg.

“The act shocked and threw the community into serious mourning because it was its first time of witnessing such an act,” he said.