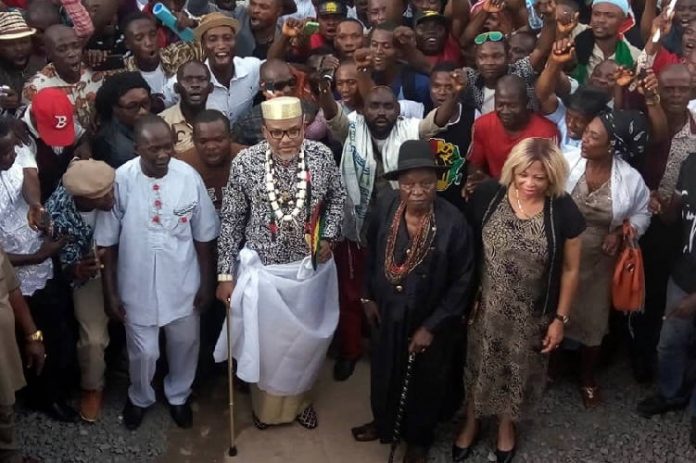 IPOB leaderhisp in Abia State has alleged a plot by security agencies in the state to eliminate their leader and Director of Radio Biafra, Mazi Nnamdi Kanu.

Soldiers in three patrol vans and an Armoured Personnel Carrier (APC) on Sunday reportedly shot and injured many IPOB supporters at the country home of their leader (Kanu) at Afara Ukwu Ibeku, Umuahia, the state capital after some of their members foiled attempt by the soldiers to gain entrance into the palace of Kanu’s father.

They alleged that they had before the foiled invasion got information from a source that the army authorities in the state have concluded plans to come and abduct Kanu since the court was yet to reverse his bail.

It was learnt that three members of IPOB were reportedly shot,while others sustained different injuries as the soldiers were said to have shot sporadically following the resistance to allow them gain entrance into Kanu father’s compound.

Narrating the incident, Nnamdi Kanu in a telephone conversation with newsmen said he was resting at about 6.30pm on Sunday when one of his relatives drew his attention to heavy presence of soldiers at the main entrance to his family home.

He said before anyone could know what was happening, the soldiers who he claimed came to kill him started shooting sporadically and in the process wounded so many people.

The IPOB leader who described the incident as “crude show of power” on innocent and defenceless people of Biafra, said nothing warranted such show of shame on the people that are demanding and charting the course that they believe in.

He called on his supporters and IPOB members to remain calm in the face of unwarranted attack on them.

Kanu’s father and the traditional ruler of Afaraukwu Community, HRH Eze Israel Kanu described the invasion as “unwarranted and shocking “.
The monarch said his son committed no crime to warrant military invasion of his palace.

When contacted, the Army Public Relations Officer, 14Brigade Ohafia, Major Oyegoke Gbadamosi denied the allegations saying that the soldiers were on routine patrol and did not shot at any IPOB member.

Gbadamosi however accused the IPOB members of attacking the soldiers and injuring some of the officers in the process.

But the State Commissioner of Police, CP Adeleye Oyebade in response to a text message sent to him by our reporter confirmed the incident.

Part of the text message stated “Unfortunately, a policeman on guard duties going to work was matcheted by the IPOB group, while a soldier man and a civilian were equally injured. All are being treated in the Police Clinic for minor injuries sustained. Normalcy has been restored, as our men are fully on ground, to ensure no further breach of the peace.”