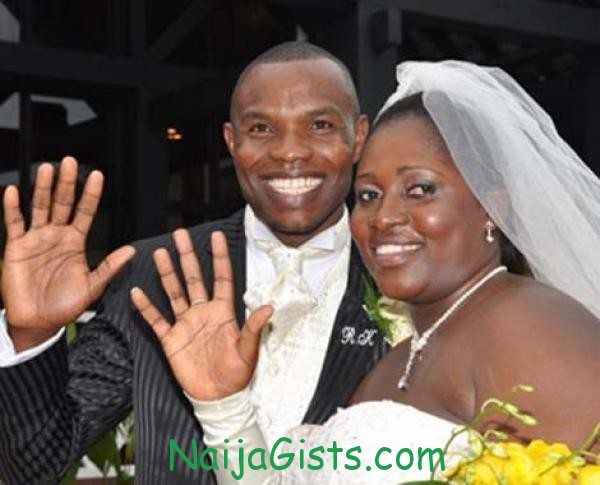 Adelaide Tawiah Kingson, the wife of a former Ghanaian Premier League Goal keeper (Richard Kingson) recently confessed on Live TV to being a witch and how she crashed his career by casting witchcraft spells on him. naijagists.com

34-year-old Richard Kingson has been on the same spot since he was let go by Blackpool in 2011.

Since 2011, he hasn’t gotten any spot in any club and has lost his place in the national squad.

His wife, Adelaide Tawiah recently appeared on a Nigerian TV where she confessed she cast witchcraft spells on him that made him impotent and sabotage his career.

Here is what she said in the confession

“I messed up Richard’s life ever since we got married. I used my evil powers to trouble his career.

“I’ve been working on him spiritually, to the point he could not perform in bed.”

Adelaide confessed as a highly controversial TB Joshua was casting out witchcraft spirit from her.

Her husband Richard insists she is not a witch .

Here is what he posted on Facebook “My wife is not a witch.”

Since her supposed deliverance was aired, Adelaide has also denied being a witch.

She claimed it was the evil spirit that was being cast out and not her spirit.

She said: “I can’t even remember what took place.

“I am not a witch as it has been rumoured. My husband knows how inspirational I have been to him throughout his goalkeeping career.”

This world is full of wickedness of all sort.

Stay tune for the confession video.