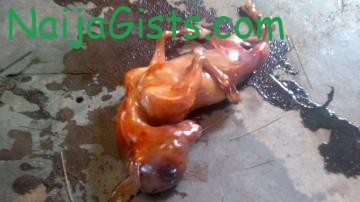 During a special program at the church, a woman gave birth to a horse.

We learnt the woman in question started screaming during the live prayer session and all of a sudden, blood started gushing out of her vagina like that of a woman giving birth.

According to an eyewitness of this bizarre birth, several worshippers took to their heels as they behold the strange creature that just came out of the woman.

Before the arrival of news crew, the horse has passed out.

One Evangelist Silva told reporters that a revelation came forth during the prayer meeting that a woman with an issue has something blocking her womb.

He further stated as prayers intensified, the woman screamed like a woman in labour and the object came out.

Hear Evangelist Silva Wealth in his own words below:

“I  can’t describe the object. We have seen people that vomited several  things during our service but not this type of thing. God has been  blessing our ministry with prophesies and miracles, “.

We learnt Battalions of people rushed to the aforementioned church to behold the strange creature.