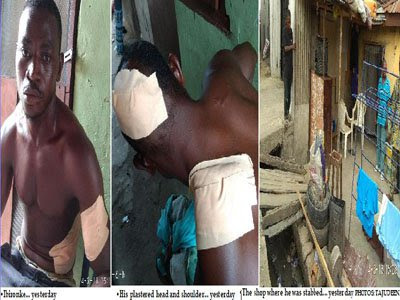 A worker of Abdul Salawu aka. Dullar, the Chairman of Somolu LGA of Lagos who escaped death after he was stabbed in the arm, back , stomach and head during a street carnival in Sunday is out of coma.

Dare Ibironke in a chat with The Nation relived how he was almost beaten to death by touts at a street carnival on Easter Sunday.

According to him, he was on his way home when somebody pointed at him saying: “That is one of Dullar’s boys.”

Ibironke, with plaster all over his body, said: “The next thing I saw were people numbering about 20 chasing me. I managed to escape from the first set of people, I met another set on my way again. They were so many. I just managed to run into one shop on Odunlade Street, many thanks to one man that confronted them.

‘’They overpowered him and five of them with broken bottles, knives, machetes started stabbing me. They also cut off my boss’ chain from my neck. I also managed to run away with blood all over my body. They continued to beat me and hit me a lot until I reached home and managed to hide inside one of the rooms. They did not see me. I knew God loves me if not, my life is gone.”

He named some of his attackers as “Femi, Lati and Sule and Bayo.

“I know some of them and I can identify them. They were actually many. I can’t name all of them. I could only recall the faces of those guys that were directly hitting me. They knew me as Dullar’s worker so that was the main reason they attacked me. All of them were carrying bottles, knives and machetes. We were all at the party,” he said.

Taiwo Salami aka Oshogbo, who confronted the boys at Odunlade Street where Ibironke was attacked, said the attackers destroyed things found in the shop including television and video sets,

Salami said: “I was the only one around when he (Ibironke) ran for safety. I had to shield him only for me to hear that he has injured someone so, I asked them to bring out the injured person for me to see. Another person joined me but, they outnumbered us. In no time they’ve started stabbing him. They stabbed him and did everything to him. That was around 9pm.”

“It was few minutes past 9pm. I was asleep but wasn’t comfortable so, I packed all my stock inside and went back to sleep. After some time, somebody came to buy sachet water and while I was attending to him, he (Dare) just jumped in and I shouted ‘Dare what happened to you?’

“Before I knew what was happening, I saw some guys coming. They were numbering about 50 shouting, ‘Get him, he mustn’t escape.’

“I struggled to prevent them from breaking into my shop but, three of them managed to get inside. They insisted they were going to kill him. That time the whole people on the street had scampered for safety. I was the only one amidst them. I just struggled to ensure that they didn’t break into the shop.

‘’While all that was ongoing, some of these guys dismantled my tables and some other things. They attempted to smash a table on my head but, it hit my hand. They entered the room of some girls close to my shop and scattered the whole place and the neighbourhood searching for Dare but, they couldn’t find him. They eventually left. When they left, we found him in a pool of blood inside one room. He could no longer talk at that moment.”

Ibironke’s in-law Olumide Onasanya, who joined other family members to take him to the general hospital, said: “I was called that some hoodlums have killed Dare. When I got there around 10pm, I saw him in a pool of blood. He could not stand on his own. He was struggling to breathe. I saw him lying on the ground at Awoseni Street. We had to carry him on a bike and take him to Alade Police Station for police report because he won’t be treated without it. We met the council chairman at the police station. He assisted us to get the police report before we took him to the general hospital. As of that night, he was unconscious. He was placed on oxygen and life-saving machine before he could come back to life at midnight.

“It was yesterday that he started talking. So, we asked him questions about the identity of the guys that attacked him and he started mentioning names. He identified about four or five’’.