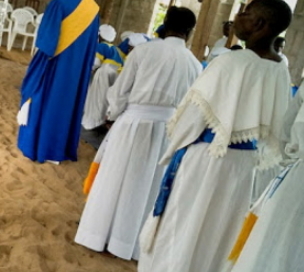 The Leader of the Church, Prophet Oladejo John, told newsmen that the culprits carted away money and phones and created fears in the people of the community with gun shot by on Tuesday in Abuja.

When newsmen visited the community, they gathered that the bandits were four in number, adding that they wore the military camouflage.

The culprits attacked the church around 2 a.m. on Tuesday and initially abducted three women, who were participating in the church’s vigil.

The leader of the church, however, said he picked a bottle and threw it towards the direction of the bandits as they had abducted the three women from the church.

John said upon breaking, the bottle made a gun-like sound and made the bandits to shoot back and disappeared, leaving the women behind without abducting them.

“I came back, took a bottle of soft drink around the Church premises, then threw it in the direction of the bandits, it hit a rock and sounded like a gunshot.

“They fired back at my direction and ran away, leaving the three women behind,’’ he said.

Mrs komolafe Bose, who was an eyewitness, said the culprits came into the church and ordered everyone to lie down flat on the floor and asked for the pastor.

Bose said that John stood up and identified himself as the pastor, adding that they searched everyone, took our phones, money and other valuables in the church.

According to her, they asked daddy where is his gun, Daddy asked them to introduce themselves first, then one of them used a stick and hit him on his body.

“The other one attacked and beat him, asking where he kept his money and phone.

“After robbing us, they took four women away including daddy’s wife, they took me with my daughter, when getting outside the Church, they asked me to go back.

“My daughter was taken away, on their way inside the bush, they told one of the women to go back, and then left with the remaining three.

“They told our pastor to pay N5 million for the women to be released.

“He followed them behind, on his way, he saw that the woman had been released.’’

Mr Akinlami Aduragbemi, a resident in the area, called on the Federal Government to release securities to the area, as they need it in the community.

Aduragbem further urged the government to act now and fast about it, adding that they might not be able to sleep without proper security.

The case was reported to Zuba Police station in the morning and they came immediately with enough officers for investigation.