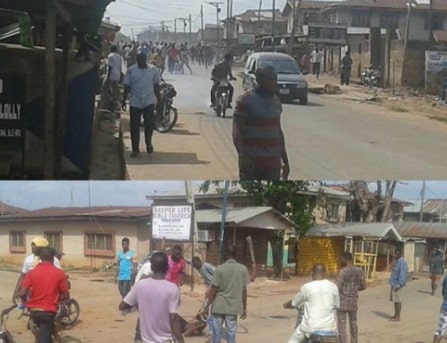 Tension took over Sabo area of Ile Ife, Osun State this morning after the alleged killing of two men at a mining site located in Aruwa Village.

According to a top security source, a fight at a mining site in Aruwa involving some labourers led to the death of a northerner and a Yoruba man.

To prevent reprisal attacks on Friday, a large number of security operatives were said to have been deployed in Sabo, an area inhabited by mostly northerners.

However, indiscriminate shooting was heard in the area, leading to safety concerns as businesses hurriedly shut down.

A resident of Sabo, Tayo Olapade told our correspondent that it was the deployed security operatives who were shooting.

Woman Dies After Getting Abortion From Niger Village Chemist
Woman Arrested For Walking Strangely Caught With 1.9Kg Of Pure Gold