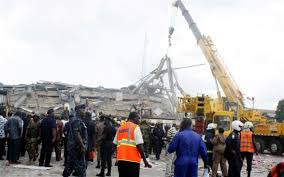 A shopping mall under construction yesterday collapsed in Benin, the Edo capital, killing one worker and injuring three others.

The incident reportedly occurred at about 10.30 am when part of the building located along Sapele Road suddenly caved in while the four workers were working on the top most floor.

The deceased who was identified as Mike Matthew was said to have died when a wood pierced his chest.

The body of the de­ceased has been deposited at the Central Hospital’s mor­tuary, while the three other victims are currently receiv­ing treatment at the hospital.

One of the victims and a graduate of Mechanical En­gineering from the Univer­sity of Benin, Sunday Onio­vusa, said that he was lucky to have survived.

“Some of the blocks that fell prevented the planks on the ground from harming us; I was lucky. But in the boy’s case, there was nothing to protect him, so one of the planks pierced his chest.”

The sub-contractor and supervisor, Morris Omor­egie, who disclosed that the form work had been pre­pared by a different contrac­tor, said the remains of the deceased had been deposited in a mortuary, while those injured were still receiving treatment.

“I am directly involved because I lost someone. I called them to place the con­crete and their form work collapsed. The form work was supposed to hold every­thing until 21 days. They are my persons, so I am the one handling the medical bills so far”, Omoregie said.

One of the victims who pleaded anonymity on hos­pital bed said they were working when they suddenly went down.

He disclosed that they were hired for the sum of N3000 per day, and that the concrete they were using fell on them as they landed on the ground.

He said the project supervisor narrowly escaped as he was few meters away from the place.