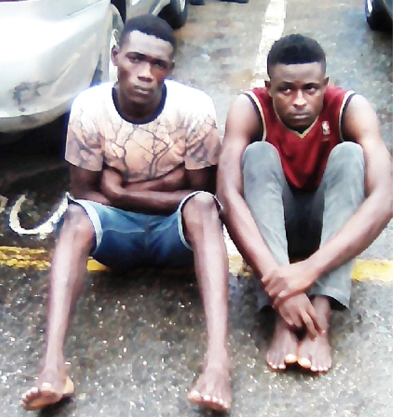 Ridwan Balogun, a suspected murdered has told the police that he joined cultism to avenge murder of his elder brother six years ago by cult members. Balogun was arrested for stabbing 29-year-old Abiola Lateef to death during a birthday party in Mushin.

The suspect said he pounced on Lateef and stabbed him on his shoulder, neck, stomach and buttocks after someone fingered the deceased as part of those who murdered his elder brother.

He said: “On that fateful day, one of the members of the Eiye group was celebrating his birthday.

I was invited to the party by a friend. When I got there, my friend pointed at Lateef. He told me that Lateef was among those who killed my brother, Azeez, six years ago. I immediately stood up from where I sat. I took a bottle, broke and stabbed him. “I don’t know what came over me that day. I had, however, been searching for all those who killed my brother in order to avenge his death.”

Detectives attached to the Lagos State Command arrested Balogun in connection with Lateef ’s murder. The suspect was alleged to be part of cult members who murdered Lateef at a birthday party at Mushin, Lagos.

The state Commissioner of Police, Mr Fatai Owoseni, said the suspects were arrested by operatives of the State Criminal Investigations Department (SCID) and Alakara Police Station. Lateef, a motorcyclist, was said to have gone to buy sachet water at a nearby shop in the neighbourhood when the suspected cult members descended on him. Balogun confessed that he stabbed Lateef to death because he killed his elder brother six years ago in the same community. The murder of Lateef occurred at No 2, Agbe Akolade Street, Idi-Oro, area about 9pm on October 18, 2015.

A member of the Eiye Confraternity was the celebrant. The deceased was rushed to the Lagos University Teaching Hospital (LUTH), Idi-Araba, Mushin, where he was confirmed dead on arrival. Balogun continued:

“I was initiated into the aiye cult group two years ago. I joined cultism because I wanted to avenge the murder of my brother. I was not comfortable where I was hiding after the news about his death got to me.” Lateef ’s cousin, Aishat Yusuf, said she was inside the mosque when she heard the screams of the deceased.

According to her, Lateef called for help after he had been repeatedly stabbed. She said:

“When I heard his cry, I rushed home to inform my grandmother and some other residents. We all rushed to the scene.