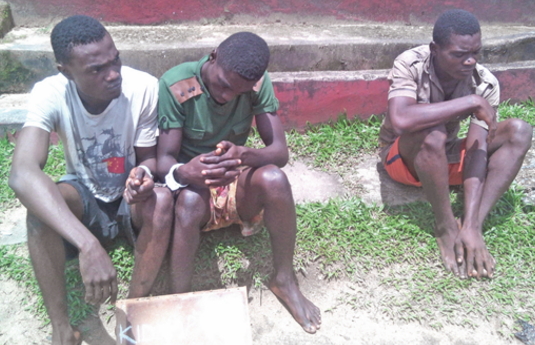 The state Commissioner of Police, Mr. Jimoh Ozi-Obeh, who also paraded 13 others for various crimes, such as armed robbery, said the two brothers were also found with two locally-made revolver pistols, one locally-made Beretta pistol and 10 rounds of .9mm live ammunition.

Briefing journalists in Calabar yesterday, the commissioner said a third suspect, whose name he gave as Promise, escaped on sighting the police. According to him, efforts are being made to track Promise down.

He said: “On August 16, about 8p.m., a surveillance team from State Housing Police Station led by ASP Ekhator Osunde, received a distress call that some group of armed boys were about to kidnap Okon John Nsi, the Managing Director of Peace Garden Hotel, located on Old Odukpani Road, Calabar.”

Ozi-Obeh explained that based on the information, the police swung into action and arrested the two brothers while their friend escaped. Also paraded were Mgbeje Uguge (24), Wisdom Betian (26) and Julius Afakel (27), among others who, allegedly invaded the premises of Ajuwon Tolu and carted away HP laptops, Techno Ipad, Nokia phones worth N549,200 as well as a cash of N81,000.

The police boss, who appealed to the public to avail the police of information in their locality, said his command would continue to work hard to reduce the crime rate in the state. Ozi-Obeh also promised to put mechanism in place to check crime in the ‘ember months.’

He said: “We are ready to work but we need information to act upon. We are heading to the ‘ember months’ and we are working hard. “As you can see, the state has been quite calm in the last one month and during this period of yam festivals, communities like Yakurr that had some problems have been celebrating the festival peacefully.”