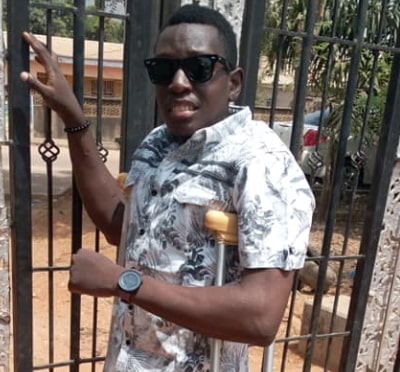 Japheth’s parents are retired school teachers. They have spent every penny that comes their way trying to rescue him from the stranglehold of sickle cell anaemia but there seems not to be any sign of light at the end of the tunnel.

Rather, the condition of 29-year-old Japheth Ezekiel Marchibi appears to worsen with each passing day, prompting the embattled indigene of Akwanga Local Government Area, Nasarawa State to plead with God to take his life.

He said: “I would have been a graduate a long time ago but sickle cell has deprived me of that dream.

“In 2007, I was offered admission at the Federal University of Science and Technology (FUT), Minna, to study Fishery and Aquatic Management. When I was about commencing registration, the sickle cell crisis struck me down and I missed the admission.

“I remained at home battling sickle cell until 2008 when I got another admission to study Statistics at the Nasarawa State University, Keffi. I started well from year one to three, but the ailment struck me down again.

“I missed a lot of classes and continuous assessment tests. Statistics is a course that one really needs to give attention.

“It got to a point that I could not carry on with the course, so we made a decision to do a change of course to a department where I could cope, because Statistics is pure Mathematics and missing classes was not the best.

“I changed my course to Psychology and from 300 Level, I was taken back to 200 Level. I started again and was doing well but the sickle cell crisis was still assailing me.

“Before then, I was battling with a condition known as sickle cell ankle ulcer. It is a kind of wound that appears on the leg. “It will start like a mosquito bite, but if you don’t manage it well, the wound will grow out of proportion.

“I was battling with it while attending lectures and managed to get to 400 level.

Japheth, who said he was undergoing excruciating pains in his left leg because of the killer disease, told our correspondent amid sobs that God should not have allowed him to come to the world if only to save him from the pains and agony occasioned by sickle cell anaemia.

He compared the pains to being hit by a tornado, adding: “The pain is difficult to describe. It is right in your bones and you can’t move, eat or talk. You feel it in your back, your joints and in your kidneys.”

Japheth recalled that the ailment has denied him many life opportunities, noting that his journey in life so far has been that of pains as he has been going in and out hospitals. He said: “I was born on February 28, 1989 as a sickle cell child. So far, the journey has been an episode of pains in and out of hospital.

“My primary and secondary school days were very challenging, but I managed to complete my secondary education.

“I became very unhappy and depressed when my parents revealed my condition to me. I wondered why I should be saddled with such a condition. The financial cost and emotional pains that have gone into this are unimaginable.

“It begins like fever and gradually leads to a condition known as AVN in sickle cell. It is a condition that mostly affects the hips or the joints.

“So in October 2014, I was diagnosed of AVN. My left hip was damaged due to lack of oxygen supply to the bone.

“Sickle cell is a blood disorder. We were told I needed a hip replacement surgery with an artificial one because my left hip was totally damaged.

“We consulted many hospitals in the country and most of them said they could not perform such surgery with sickle cell ankle ulcer on my leg.

‘How ailment crippled my knee, scuttled my university education twice’

“Most hospitals said the ankle ulcer needed to be treated before the hip replacement surgery. Throughout 2015, we tried to cure the ankle ulcer to no avail. I was on wheel chair throughout the year.

“The pains were undefined, placing my leg in one direction to comfort myself led to total damage of my left knee, which is called ankilosis. So, stretching my knee again became a problem.

“At this point, I was battling with three issues: ankilosis, AVN and ankle ulcer, all on one leg, and the pains were much

“Throughout 2015, my parents emptied all they had saved in the civil service to get me back on my feet, but it was really proving stubborn. My condition deteriorated daily with excruciating pains.

“There was a time I saw my mates in the university on Facebook celebrating their graduation. I cried endlessly on my sick bed. I was traumatised because graduating from the university has always been my dream.

“Then in 2016, we ran into one medical doctor, Dr Ahmed. He has an orthopedic private hospital in Wuse II. He promised to carry out the hip replacement surgery without treating the ankle ulcer.

“In July of the same year, he carried out a successful hip replacement surgery on me. The fee for the surgery was N2 million but we ended up spending N2.8 million, excluding feeding and other expenses.

“My father got himself indebted to raise the money. But after one week of the surgery, I observed that my left leg was dangling any time I wanted to move, even though I had kept to the doctor’s instructions.

“We went for the x-ray and it was discovered that the replaced hip was dislodged.

“The pains were too much. We went for a revision surgery and the surgery site was opened. The pains at this point cannot be described.

“He did the revision surgery and it was pushed back into position. I was on cast iron for a month. They had to separate my legs with an iron rod. That was another painful experience I will never forget.

“The pains were so much that I could not go to the toilet. I was literally incapacitated, but I was later discharged.

“At home, I was on wheel chair tolerating the pains and trying to see if I could by chance go back to school, because there was no money to carry out the knee surgery again. My knee was already damaged and we needed its replacement via surgery. “While I was battling with how to look into the knee surgery, the hip replacement surgery dislodged the second time. This time, it was totally out of position.

“The day I was told the hip replacement surgery I did had dislodged again and totally gone out of position, I felt like just dying to bring an end to all the suffering and pain. It was really traumatising.

“I was asking God why He would allow me to suffer like this. Is He really hearing my prayers? He knows the reason why He allowed me to come to the world bearing sickle cell. It appears God was not fair to me by allowing me to come into the world.

“I made a decision not to go back to the theater again because doing so would increase my pains. So since 2016 till date, I have been living with a dislodged hip, ankle ulcer and knee pains all on one leg.

“Recently, we went back to the hospital and the doctor said the surgery site was infected because the wound refused to heal and that another hip replacement surgery needed to be conducted.

“But there is no money as my poor parents have exhausted all the money they have made in their life time.

“I am now in a hopeless situation with pains.”

His father, Mr Ezekiel Marchibi, 70, said he got married on December 21, 1973 when the world was not exposed to the modern technology of ascertaining partners’ genotypes before going into marriage.

He said that from 1989 when Japheth was born till date, he has not known peace as he has been constantly in and out of hospital and his entire life savings have gone into his treatment.

“I have exhausted myself, incurring huge debts to save his life without any improvement,” he said.

Although he says he believes in miracles, Marchibi, who himself was not feeling well due to old age, said he had come to terms with the reality that death might come knocking at any time.

He said: “I can see through the pains my son is nursing. If anything, the 47 years of my happy marriage have been crippled by the fear of when death will come knocking on the door.

“If I have another chance, I definitely will opt out of this mess. I will carefully verify all the little details about my partner before going ahead with marriage.

“But it is late now. We have made our choice and we have to stick by it. We are putting all our hopes in the Lord for a miracle.”