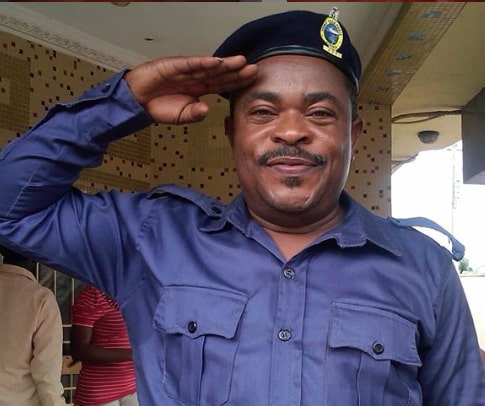 The breaking news of the removal of Chief Emeka Ihedioha as governor of Imo State was like a tornado to many within and outside the state. One person that was more affected is comic actor, Victor Osuagwu, who was appointed Director of Arts and Culture barely one week before the announcement. Osuagwu, a graduate of Theatre Arts from the University of Port Harcourt, Rivers State and former Chairman, Actors Guild of Nigeria (AGN) Lagos State, speaks to SAM ANOKAM about his plans for Imo State, his next move and his many other responsibilities.

How did you receive the news of Emeka Ihedioha’s removal from office as you have barely sat down in your new office?

I’m a human being. It was a real shock. I wasn’t expecting what happened based on what great job that was already taking place in Owerri. If you work with Ihedioha you will know that you are working with somebody who is intelligent in every sphere.

He was not working for himself. It was a very big shock to all those who voted for him. I was there with him from the beginning and you could see how people embraced and welcomed him in every community in the whole local governments.

It is like they saw a messiah coming to rescue them from the grips and shackles of bondage they have found themselves in.

When God wants to do certain things, He does it in a mysterious way. It could be a way of exposing some of the people who are still in that same government that have nothing to give out to the people.

What were your plans as Director of Arts and Culture?

One of my plans was to use arts and culture to create value in the state. I wanted to use that opportunity to touch the lives of a lot of people. To bring out the best of the cultural heritage of Imolites because in Imo state, we have a lot of cultures from different communities.

Every Christmas in every community, they have one thing or the other they are celebrating and bring the people together.

Wherever you are you would want to come and witness such events and that was exactly what we planned – to bring to the people to see because the world have not known a lot about the Imo people and that was our target to expose them to the global village.

We are already working on a programme line up for it. The programme would have commenced February 14 which was Valentine’s day. We had lots of programmes like variety shows, culture, dance, etc. I have in mind to have an inter cultural festival with other states like Rivers, Enugu, Anambra among others.

In Rivers states for instance, they have beautiful cultures, that is where I schooled. We wanted to do a whole lot of things which we lost in the past administration because the arts and culture were rendered useless.

The arts and culture which I was grew up in Lagos was that every month, there is always one event at the theatre that attracts people. I am talking about stage.

This is where the actors participate along with the audience on stage and you know it is fulfilling watching your old stars display on stage. I wanted to bring other stars to be part of this regardless if you are not from Imo.

Let’s assume the present governor reads this story and calls you to work with him, will you accept?

As long as there is no political attachment to it, I will do it because it is my state. You cannot leave such innovation, creativity to die like that.

I will do it after consultations because I would consult with people that made me to come me into the politics of the state. The target of every other person in the state is to make sure that Imo will have one or two things to contribute to make the state a hub of entertainment.

We cannot come to Lagos and contribute our quota in our little way without bringing it down home. One day you will definitely go down home and they will ask you questions saying you went to promote others states and you never thought of your own.

It was an avenue for me because I have prepared my mind to dish out everything on the inside me. I have a lot of stuff inside me.

With all these what are those things you can do on your own for Imo?

The fact is this; I, as an entertainer cannot sit idle just because I am out of government. You must create something. Our idea is to make Imo the hub of entertainment not just because of politics or whatever but because of the immense potential the state has.

I have been doing it before now. I started creating entertainment in Imo since 2003. I was the first person that staged the show called, ‘Owerri Must Laugh’ and I continued with it to 2008.

It used to come up every last Sunday of December. It became a show that everybody looked forward to. Every Christmas people will be expecting it until when some people hijacked the title but they didn’t know that it was registered.

For the past eight years, some other people began to use it not knowing that it was registered. But as a creative and busy person, I overlooked it. When I was made the Director of Imo arts and culture, I had already designed another name for it.

We cannot just abandon our state especially when it comes to entertainment and development. We must contribute to it. I am planning a health summit which I did in Lagos in 2017.

We were able to give over a thousand people free medical test and we also supported some of them in the treatment of their ailment from eye to kidney etc. It was awesome. I want to also bring same down to Imo then to Abia.

What are you working on now?

Like this Nollywood health and entertainment summit that I am planning for October, I have almost 72 episodes of work that I did with my friend when I left office as chairman of Actors Guild of Nigeria (AGN) Lagos state branch.

We are still scouting for the marketing. I am planning to start another one and you know what is happening in the country now especially with the coronavirus, we have been thinking whether it will stop us but we are not relenting as our fingers are crossed.

What are your thoughts about this new AGN?

I must tell you the truth, I am impressed with the new government of AGN led by Emeka Rollas. If they continue with this drive, in the next two to three years, Nollywood would be proud to say yes, we have a change.

So many people have a negative impression about the actors guild and you know some years past, the association has been going through some administrative hiccups until Emeka Rollas came in and there is stability and peace.

In any government that there is problem, it is not possible to grow in it. The past government suffered a lot of hitches that many people broke away from AGN. They wanted to form their own guild. Some people were there fighting that the president was not properly voted into power and a lot of other things.

Some people might be doing all those things intentionally to make sure that things did not work well as long as the source where they are coming from is paying them. There could be somebody there sponsoring somebody. I have no doubt about the efficiency of this new executive.

Nigeria is blessed with talents but we do not have support. The little support we are getting are coming from private individuals. If the federal government focus their attention.

Today we know America for entertainment because so many people who have not traveled to America would say they are a super power just by watching their films. And sometimes it is a project work. In some African countries their government are also supporting their project work which is not done in Nigeria.

Though some parastatals are beginning to be interested in Nollywood but it is high time the federal government look into the matter of entertainment because there is nothing entertainment is coming from them. Jonathan’s government really supported the entertainment industry.

If companies invest in the entertainment industry, they would make huge profit. The public should see us as ambassadors of peace and unity because we bring happiness to your doorstep.

You are a knight, a chief, a community leader; you have so many titles, how do you combine all of these with acting?

As an entertainer, I see myself rooted in culture. I love my tradition. When they made me president general of my community, I never saw it as a burden but as a blessing because stuff like this would bring out the best in you.

As a knight, I see myself as a committed Christian because you cannot be given a knight if you are not committed. When I say committed, I didn’t mean by giving money, I do that but that is not the criteria. Some people wonder how I attend church regularly as a busy actor.

My tenure as president general would soon end. My people are already asking that I continue but I said no, let others also be given opportunity to serve. Aside of these, family is there. you must give family 80 per cent of your attention.

And I thank God for my family. With my wonderful wife who understands me right from the beginning, I am blessed. We were friends.

I see my wife as my girlfriend to this day. She knows everything that I do and I try as much as I can not to hurt her. I thank God for the grace.

The school that was abandoned for years is having a facelift. We try to attract investors. We are currently doing a water project soon to be commissioned.

Continue Reading
You may also like...
Related Topics:nigeria blessed with talented, Victor Osuagwu