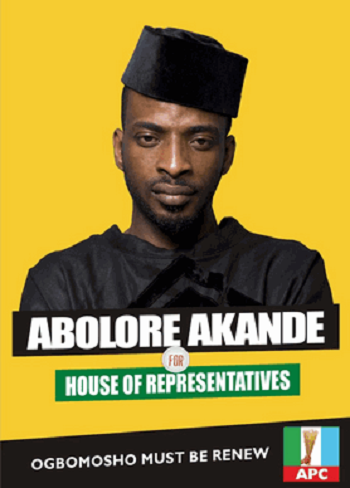 After several weeks of campaigning and horse-riding stunt, Nigerian musician Abolore Akande has lost in the recently concluded APC primaries in his hometown of Ogbomoso.

The Gongo Aso crooner lost to the son of Ogbomosho High Chief, Prince Akeem Oyewunmi on Sunday the 7th of December 2014.

This is a big blow to the singer who is very sure his people will vote him in as their Federal Representative in Abuja.

The singer has now joined the growing list of celebrities who have lost their parties tickets in 2014.

Kate  Henshaw, Dayo D1 Adeneye, Kenneth Okonkwo and Kenny Saint Best are the 4 celebrities who lost out in their parties primaries recently.

The only winning celeb is Nollywood actor Desmond Elliot who did a very good job by wooing Surulere people to his side.