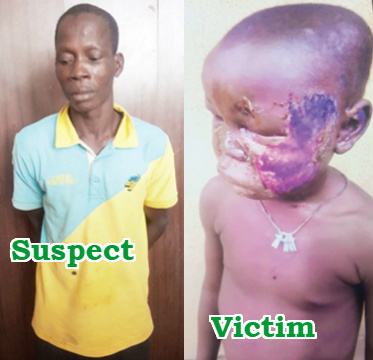 A 5-year-old girl has been rescued from the hand of her violent father in Ikotun area of Lagos.

The victim identified as Monsurat Idowu was told to dispose off the content of a potty in the latrine but the poor child fell into gutter.

Her merciless father who was infuriated because she accidentally fell into the gutter descended on her and beat her with a hot iron.

A neigbour who witnessed the tortured episode reported the matter to the police.

He was immediately arrested while the child was rescued.

The 45-year-old roadside mechanic who resides at 8 Kayode Koyejo street in Ikotun, Mr Sukurat Idowu is currently being investigated at the gender unit of Lagos Police command.

A police source said effort is on to trace the mother of the victim who has been separated from the father since she was two years.