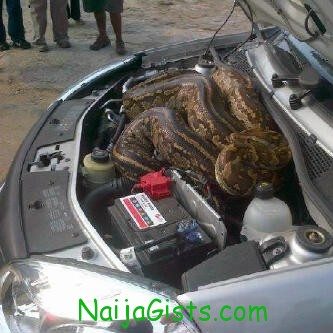 Another Snake on engine

It used to be Snake on a plane but a scenario that took place few weeks back in Brazil has made Snake On Engine more popular.

The car owner left his car parked overnight with no sign of this monster on his engine.

The following morning, he got the shocker of his life when he discovered a giant live snake taking a cossy rest on his car engine.

How did it get there? Mystery

Before engineers could get there, we learnt the massive snake has crept further into the engine (how?).

In the video below, engineers were seen working on the engine of the car before discovering the snake’s hiding spot and slowly pulling it out.

As they lift it from the vehicle gathered onlookers gasp in shock, and it’s not surprising, because the snake is massive.

It’s not know what happened to the snake after it was extracted from the car… or whether the driver ever dared to get back in their car again.

Sorry about this snake haters we don’t mean to scare you.