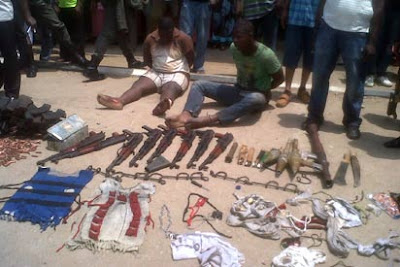 The Delta Command of the State Security Service (SSS) on Wednesday in Asaba said it has secured the conviction of eight persons for kidnapping and other offences in the state.

The convicts, according to the command in a statement signed by Mr Alex Disi, Assistant Director, Operations, got a total jail term of 44 years.

In the statement the command said the cases against the eight persons were concluded between February 8, 2012 and July 10, 2012.

It listed the convicts as;

The command said Obiakpani, Eze and Okafor bagged 10 years imprisonment each for kidnapping, conspiracy to commit felony and harassing the family of a kidnap victim.

The charges against the trio, the statement said, were determined by Justice Theresa Diai at the Ogwashi-Uku High Court.

It also said that Omonigho got two years and 18 months, respectively, on charges of stealing and threat to life.

“Boyite and Erakpor were individually sentenced to three months imprisonment for each of three-count charges, with an option of fine of N5,000 by Chief Magistrate Nnamdi Onyekwe,” the statement said.The statement added that Isibor was sentenced to three years and 18 months, respectively, on a two-count charge of threat to life of Walter Okafor “through text messages and demanding with menaces”.

It said Asoro, who was arrested at Oghara, Ethiope West Local Government Area, in April, 2012, got three years and 18 months, respectively, for conspiracy to kidnap and harassment. Disi said the eight concluded cases were among the numerous crimes being investigated by the command as part of efforts to curb kidnapping and threats to lives of citizens.