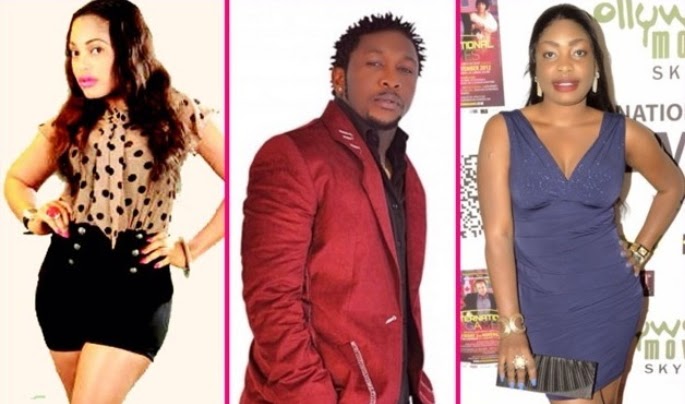 On Wednesday, NaijaGists.com shared with you the exclusive story of Nollywood movie producer Tchidi Chikere who dumped his wife and three kids for actress Nuella Njubigbo.

Just few days after his traditional wedding, Tchidi took to Twitter to insult his ex-wife, Sophia Tchikere, the mother of his three handsome boys.

The controversial movie producer even said his former wife used Juju to marry him.

To cut the long story short, Sophia has replied Tchidi via a PR.

Read Sophia’s graceful reply to her ex-husband below:

Tchidi Chikere, I read all you said about me and I laugh. Is that the best way to justify yourself? It is well. I will not exchange words with you still because there is nothing you say or write about me that will shake me because those that put their trust in God, He never fails them.

Why are you lying to people? For them to turn around and clap for you and justify what you did? Is it because people who know the truth are saying it and it’s hurting you and you are now looking for a way to justify yourself. I give 10 years of my life and this is how you repay me? By disrespecting me and my family?
You said I used juju to marry you. If truly I and my family used juju to hold you, let God who sees everything judge me and you.

You bring money for the upkeep of your kids and you are writing about it? Like seriously, are they not your kids? Whose responsibility is that? And who is disputing that with you? You said since you married me that I have not given you no love, no affection etc but you forgot the interview you granted to Punch newspaper in 2011 saying that I am the best thing that have happened to you.

You said I never had time for you? When you are always filming in the east and I won’t see you in months. I played the role of father and mother to the kids…and I laughed the more when I saw where you wrote that I didn’t feed you for 5 days.. Is this all in desperation to justify yourself? Wow!!

Even if you say that I am a prostitute tomorrow or a thief, people who know the truth know the truth and God knows everything and sees the heart and he will pay everybody back according to our deeds. So am not shaking!!

I will never say anything against you to gain favour from people! No you can’t hide pregnancy. I gave you my life for 12 years, gave you 3 lovely boys, gave you a home. And you always say to me then, I was a good wife to you and you know it. I was loyal to you and never cheated on you. I swallowed and stomached so many things just to make my marriage work. I turned deaf ears to so many things and covered my eyes to so many things.

I remember all the stories I heard about your escapades with other women, but did I leave you? I stayed with you because marriage is for better or worse and when you started your affair with Nuella in 2010, what did you say to me when I confronted you?

I stayed, endured and prayed every night. Have you forgotten the day I almost committed suicide? The first time you left me and the kids? I wanted to end my life but God saved me. Even as you left us in 2012, I keep saying to people that my marriage is intact and I never changed my name from Sophia Tchidi Chikere till date.

Have you not done enough to me? You are married now and still I wish you and your new wife well. Why can’t you leave me alone to face my children and fill up the vacuum this has created in their lives? You say such evil things against their mother and they are hearing it from their schoolmates. Their schoolmates are taking about it and asking them questions everyday and yet your not satisfied. You claim you kept quiet because of them, yet you have been talking and tarnishing my image since 2012? Yet I kept mute. I have not and will never say anything bad against you. Vengeance is of the Lord, unless he is not on the throne.

You put up my pictures with my friend to use against me? You want to use it to justify what you did to me? What you put me through for years? You said he is my boyfriend that I go to see in London and I ask you Tchidi, when I was with you, did I not go to London 2 or 3 times yearly to buy clothes for my boutique? Everybody knows that I am a business woman and I buy my products from London and America. And so because I have a friend in London, I now go there just to see him? Lol He is my friend, my pal, my buddy and my best friend.

We started being good friends in 2013 after Chidi left me and ended our marriage. He is someone that is very close to me and my confidant. All these years I have had women as best friends and they all betrayed me, and I decided to have a guy as my best friend. We go everywhere together and he assists me in shopping and buying things for my shop etc I can’t deny him. He is my friend. People that know me very well will tell you that I love taking pictures and so we took lots of pictures and the guy posted it on his Facebook page and some people copied it and started posting it online. I have also kept mute about it and I would have still keep mute if not that Tchidi raises it and wanted to use it to tarnish my name.

But is well. My kids read what their daddy wrote about me and they asked me to respond and tell the whole world that you are wonderful mother and that they know and they are seeing everything and won’t say anything till they grow up! So am responding to this because of my three lovely boys that I live for, that am blessed with.

I want to beg Tchidi to please allow me to concentrate and train my kids with God’s grace and help. I wish him the best in his new marriage.I bless his new marriage with his new wife and I wish them well. This will be my last statement. Even if Chidi pulls the mountain to paint me black.. I will not respond again.