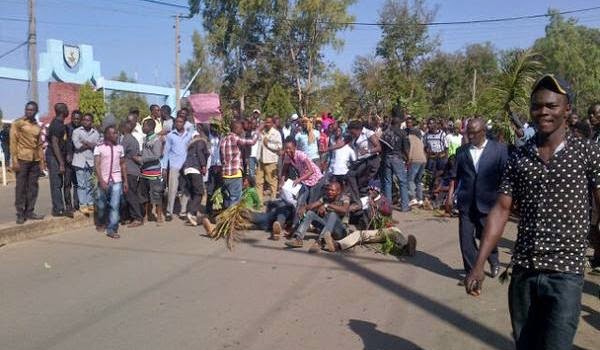 Following anti-Xenophobia protests in Lagos and Abuja, the South African consulate in Lagos has been shut.

Dozens of Nigerians carrying placards on Tuesday protested the attacks on black immigrants in South Africa at the country’s embassy and the MTN Head office, both at Maitama, Abuja.

The protesters, led by members of the National Association of Nigerian Students, NANS, demanded an immediate end to the attacks and killings of fellow blacks in South Africa. They also threatened to attack South African nationals and businesses in Nigeria, if the attacks did not stop within 72 hours.

Some of the inscriptions on the placards read: ‘Say no to Xenophobia,’ ‘Xenophobia is Evil,’ ‘South Africa, Enough is Enough.’

NANS President Tijani Usman explained that the protest was organised to register students’ grievances against the attacks on African immigrants and their businesses in South Africa by local mobs.

“Africa is our own and we should not be racists in our own continent.
“We condemn such acts and we call on President Jacob Zuma of South Africa to address this issue with immediate effect, otherwise South Africans in Nigeria will not find things easy here; we will make sure they are deported and we will shut all their businesses.

“This is a signal; we are giving them 72 hours to stop all attacks; if they fail, they will face the wrath of Nigerian students.’’

Usman appealed to the United Nations to call the South African Government to order, adding that it seemed not to have taken any serious action to address the problem.
Investigations also revealed that the South African Lagos consulate might have been shut following a threat of reprisal attacks by members of the Oodua Peoples Congress, OPC, on South African nationals and businesses in Lagos.

Addressing a press conference on Tuesday, the Founder of the OPC, Frederick Faseun, appealed to the South African Government to halt further attacks on Nigerians in South Africa.

“While the Nigerian government and the rest of the world seek a diplomatic solution to this season of madness, the OPC hereby warns that South Africa must end this rash of xenophobia within 48 hours. These ill-advised attacks are capable of bringing out the beast in the best of men. And we will not watch as fellow Nigerians are wantonly killed in cold blood.

“Enough is enough. South Africans must know that nobody has a monopoly of violence. They must halt the killings, the maiming and the looting of foreigners’ shops in their country. These incidents of xenophobia will provoke reprisals against South Africans and their interests in other lands,” Faseun warned.

When asked exactly what OPC would do if South Africa failed to stop the attacks before the specified deadline, Fasehun said, “South Africa has many business interests in Nigeria but of course, you do not expect me to reveal what we will do until the time is right.”

Meanwhile, the South African government has deployed soldiers to volatile areas in Johannesburg and KwaZulu-Natal in a bid to quell the anti-immigrant violence.