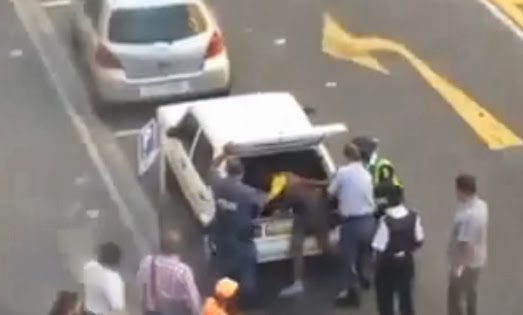 Nigeria has protested the “merciless beating” of one of its nationals by South African police and demanded that the perpetrators be punished.

The alleged victim was identified as Clement Emekeneh.

“The video of the attack which has appeared on the social media is particularly disturbing,” Ministry of Foreign Affairs disclosed in a statement, which described the incident as a “merciless beating.”

The Nigerian High Commission in Pretoria has “sent a strongly-worded note to the Department of Foreign Affairs of South Africa protesting the attack and demanding that the perpetrators be brought to justice.”

In the video, a security guard rips the shirtless man’s trousers off and then a police officer repeatedly punches and kicks the man in the groin.

Another officer holds the victim by the neck. His underpants come off as the beating continues before he is loaded into a police car.

Two officers, aged 42 and 45 years old, were arrested, charged with assault and granted bail on Monday.

The footage has sparked outrage among many South Africans.

Last year, Mozambican national Mido Macia, died after being dragged behind a moving police patrol van in a town east of Johannesburg. Nine officers are standing trial for his killing.
Xenophobic attacks across South Africa in May 2008 left 62 people dead and caused thousands to flee their homes.