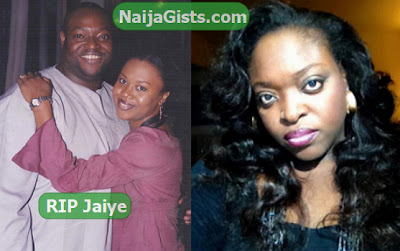 An insider from the family of late Jaiye Aboderin sent NaijaGists.com an email few hours ago, the anonymous insiders who declined to reveal his identity categorically said the life of Daniel Ademonikan, the former husband of Nollywood actress Doris Simeon who dumped his wife and child for actress Stella Damasus is in grave danger.

When the first husband of Nigerian actress Stella Damasus, Jaiye Aboderin died in 2004, the Aboderins accused the actress of killing her husband.

The actress later debunked the rumour claiming that her husband’s death was natural.

As time goes on, another rumour surfaced that the actress allegedly slept with two different lovers while she was still legally married to Jaiye Aboderin.

“No man can love Stella like Jaiye…. He loved her to the point of death” – said the anonymous insider.

In 2008, Stella Damasus was absent at her deceased husband, Jaiye Aboderin’s fourth burial remembrance party that took place on the 5th of December at The Oriental Hotel, Lekki Lagos. She claimed to be at her mother’s side, who’s recovering from eye surgery. The Aboderin family reacted saying ‘they didn’t as a family feel bad about her not being there. The reason being that she no longer bears their name.

In another development, Stella Damasus’s ex-law, Wunmi Obe has responded to the story of Stella’s new marriage.

The late Jaiye Aboderin was the younger brother of Wunmi Obe.

From the look of things, Stella wouldn’t have killed her husband intentionally.

The couple has two children together. His sudden death might be spiritual (In-laws palava)

May his soul continues to rest in perfect peace.