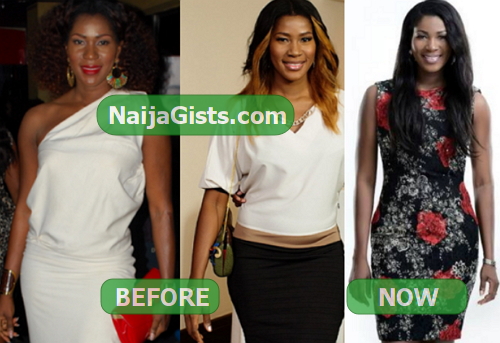 It seems Nollywood actress Stephanie Okereke has lost her pregnancy.

Though miscarriage is a not a disease, she has joined the list of Nollywood actresses like Ini Edo, Funke Akindele and others who have miscarried in the past 6 months.

Stephanie hid her pregnancy in her blue blouse ‘but her full arm and face gave her out’, said one source who was present.

She was also spotted in a beautiful maternity gown at Y Naija’s ball party earlier this year.

The final confirmation of her pregnancy was during the birthday party of former Miss world Agbani Darego… See the picture in the middle above.

Her latest picture is the one on the far right… She shared the above photo few hours ago via her instagram page.

Insiders claim Stephanie Okereke might have lost her over 4 months pregnancy to miscarriage.

She has however kept mum on the matter.