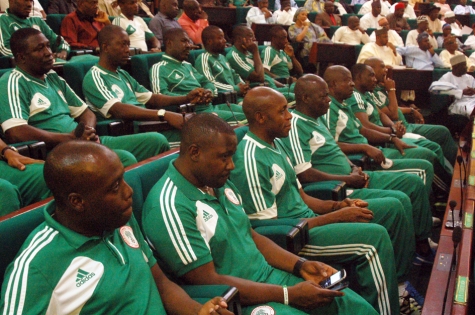 Remarks By the House of Representatives Speaker,  Aminu Waziri Tambuwal,  At The Special Session Of The House Of Representatives To Honour The Victorious  National Football Team, The Super Eagles, The 2013 African Soccer Champions,  On Wednesday 13th  February 2013.

Minute of the Meeting:

1.   On behalf of all my colleagues, the Honourable Members of the House of Representatives and indeed the entire good people of Nigeria whom we represent, I hereby formally welcome to this hallowed Chambers, the irrepressible Champions of African Soccer and the latest continental football Champions of the world-the Super Eagles of the Federal Republic of Nigeria.

2.    This Special Session holds today to relish, cherish, celebrate and honour you for this uncommon achievement that no doubt marks a new beginning in the annals of Nigerian Soccer and the rebirth of our national pride and global image in this round leather game.

3.    I know that we speak the minds of the Nigerian people if we state here that since Sunday the 10th February 2013 when you lifted the revelled Trophy, the African Cup of nations in far away South Africa, you literally lifted the spirit of the Nation and altered the focus from that of a slumbering giant consumed in the lamentations of hopelessness over the  longative  fate of an unenviable catalogue of failures that had befallen it to that of renascence in the thread of self confidence and success of yesteryears that  nurtured our collective national pride.

4.    Your achievement is uncommon and outstanding on several accounts: firstly, when you left the shores of this nation, a few weeks ago only handful optimists gave you any chance of progressing beyond the preliminaries of the competition but you wide through in style humbly one after the other, the big boys of African Soccer and today we celebrate not only a trophy but Trophies-the fair play, the highest goal scorer and the mother of them all, the African Champions Cup. Secondly this marks the first time that the nation is lifting the cup under the midwifery of an entirely indigenous coaching crew led by an indigenous coach, Stephen Okechukwu Keshi.

5.    To me, and i believe for many Soccer loving Nigerians, it is only now that we can truly say that we have come of age in the game and never again shall we go cap in hand on a recruitment drive for foreign coaches. All we need do is to replicate Keshis, the Amokachis, the Siasias and others, thirdly we did not loose a single game throughout, the competition indeed the bigger the team, the more convincingly we beat them and when I say we, I mean the Super Eagles for that is what we all  are today.

6.    Distinguished ladies and gentlemen, a bunch of youths have proven beyond any doubt that there is still hope for Nigeria and this hope is on the enterprising sport of her youth. This victory is a lesson, in self confidence rather than arrogance, a lesson in self respect, a lesson in shear doggedness, a lesson in personal sacrifice in the promotion of national interest, a lesson is unmitigated passion and above all a lesson in unity of purpose-for we prayed as much in our churches are we did in our mosques and the Almighty God honoured this spirit of unity. I only hope that henceforth, we shall not depart from this path.

7.    Fellow Nigerians, as we bask in the euphoria of this victory we must quickly remind ourselves that the task ahead is more daunting. We seek not merely to be African Champions because that much we have been twice before, but seek to be the greatest. Our goal therefore must be to overtake whatever achievements in this continental soccer competition attained by other nations. In this regards, let us remind ourselves that Egypt has lifted the Trophy 7 times, Ghana and Cameroun have done so 4 times each and all these three countries have lifted the Trophy thrice back to back. I therefore charge us all that for a start this trophy must not leave the shores of this great nation in the next 5 editions of the competition so that we shall not only have lifted it for the most number of times but become the first nation to lift it 6 times back to back. Only then shall we proclaim that we the greatest.

8.    This is doable not just in the field of soccer or sports but indeed in all spheres of human endeavour in our march to greatness as a nation-those who believe this say aai–

9.    On behalf of the House of Representatives I promise that we shall do all within our competence to ensure that never again shall we be found slumbering as a nation.

10.   Once again I congratulate the Super eagles and the entire Coaching Crew and officials for this gift of reawakening, may your zeal, passion and enterprising spirit never wave and may this fire of national reawakening burn henceforth forever.

11.   Thank you and congratulations Nigeria

See more photos from the meeting below