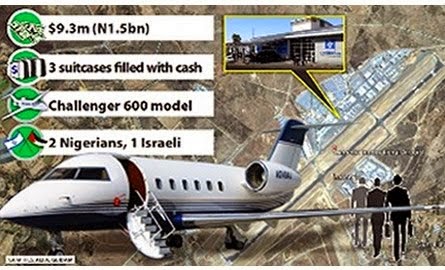 It was surprising and ridiculous when I heard the story that a private plane has been seized in South Africa with about 10 million dollars meant to buy arms to fight insurgency in Nigeria.

The plane was reported to be that of the leader of Christian association of Nigeria. What first came to my mind was why the plane of CAN President? Why South Africa? Why not our official Air force?. Because, our military officers have been complaining that arms being given to them to fight insurgency are old and of no match to that of the insurgents.

The response of the government and the military does not clearly show that they were aware of the deal, at most one wil think they are the one doing it in disguise.

Can you imagine if the plane belongs to a the Sultan of Sokoto, what could have possibly happen? Will the people of. Southern Nigeria and the likes of Asari take it lightly?

The people of Nigeria are not willing to see genuine positive change. These kinds of things should not be taken lightly. Those people should fear God and be transparent.

Our leaders in the North must rise to our expectations. If we their subjects are killed who are they going to lead?

The government should investigate the matter and take necessary action. Nobody has the monopoly of violence. While we strongly advocate for peace, but righteousness should not be compromised.

May Allah protect us and make peace to reign.

Corruption In Nigeria: Are The Masses Corrupt Too?
Nigerians & Our Fake British & American Accent By Ekene Mekwunye