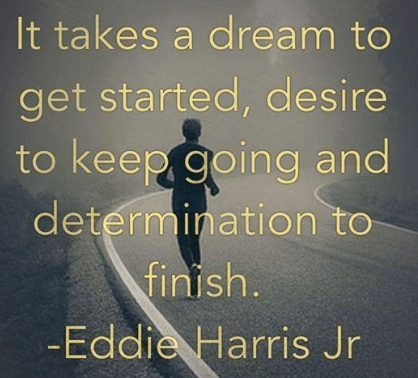 Struggling To Stay Motivated? Don’t Give Up Now. You Were Born For This!

One of the beauties of life is that we all see things differently. Each and everyone one us has a different way of handling problems and dealing with failures.

Some of us will see it through to the end and others will jump off the wagon as soon as it hits it’s first bump.

The way you handle failures and your ability to overcome obstacles will ultimately determine your success.

Below are 10 reasons to encourage you to never give up on your dreams:

1. Everyone struggles at some point
Every success story is accompanied by some form of adversity or struggle. It makes even more sense when you hear the phrase “from rags-to-riches.”

Don’t give up because you’re struggling, instead refocus and keep pushing forward.

2. You haven’t tried everything
Setbacks and struggles are no fun. You have two options when you deal with a setback: give up or keep trying. When we struggle even after trying what we think is everything, it forces us to think outside of the box and to look for alternatives.

The hidden beauty of a setback is that it produces creativity and stretches us past our current abilities.

3. Past failures do not predict your future
As they say, “You live and you learn.” Failures are nothing more than a learning opportunity. In fact, I try not to use the word “failure” at all, because for every time you don’t achieve success at something, you learn a valuable lesson from it.

If something didn’t workout in the past, then learn from it, alter your path to success and don’t make the same mistake again.

4. It will get better
Nothing lasts forever. Your struggle is no different. If you stick to your goals and keep being persistent, your situation will change for the better. Always remember that with the right amount of hard work and determination things will turn around.

5. You’re alive
You were born for this. Scientists estimate the probability of you being born is 1 in 400 trillion. Yes, trillion with a T. Let that sink in for a moment. As long as you’re alive you have no excuses.

You were put on this earth for a reason. You were given this chance at life and you can do anything you put your mind to. You owe it to yourself to make the most of it.

Earl Nightingale said it best with “Never give up on a dream just because of the time it will take to accomplish it. The time will pass anyway.”

When you reach your goal in five years, you won’t regret the time you put in now.

7. You’re closer than you think
Often the difference between success and failure is the last leg of the mile. We set goals, we work so hard, but after a while when we don’t see the results we’re expecting we decide to give up. This is the biggest mistake you can make.

So many people never reach success because they give up right before the finish line.

What if instead of proving the world wrong, which they did, they gave up on their dreams?

9. Prove others wrong
It would be wonderful if we lived in a world where everyone supported and believed in each other. Unfortunately, that’s not how the world works. The truth is you’re not always going to have the support you need.

People will try to talk you out of your goals. They will tell you it’s not possible, that it’s too risky, and that you’re wasting your time. Don’t listen to them.

Never let someone talk you out of working towards your dreams because they gave up on theirs.

10. If you give up, then what?
There is no better feeling in the world than the feeling of success, especially after you’ve overcome every obstacle through pure grit and determination. If you give up now, what’s that going to feel like? What are you going to do next?

I’ll tell you! Giving up will leave a bad taste in your mouth and you’ll be more likely to give up again in the future.

So instead of giving up the next time you get tired, learn to rest, not to quit. If you’re not finding the success you want, just as with a setback, reevaluate your situation, think outside the box and find a way!

If these reasons aren’t enough to motivate you or you want more, here’s my guide to developing a never give up attitude.

About the author: Gary Savoie is the founder of Laugh At Diversity Motivation Blog. He is a self motivation author and speaker.