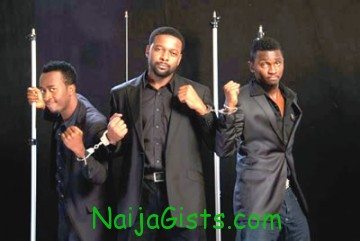 Few months from now, the trio that makes up hitherto beloved R n B group, Styl Plus, Shifi Omoefe, Zeal Onyecheme and Tunde Akinsanmi, will be bidding one another as well as fans a final goodbye.

A reliable source told reporters earlier in the week that the stalemated and stunted career of the Abuja-based group might have necessitated the decision of the members to try out their luck individually. “Zeal is already talking to a big Nigerian music star about the possibility of being signed under his label. He wants out of the group. He is frustrated like the other members but he is the one who is making the most moves to kick-start a solo career,” the source tells us but refuses to divulge who the music star is. He would only reveal that Styl Plus was already a national phenomenon when Zeal’s prospective boss had not even had a bearing for his career.

How Styl Plus Started

Styl Plus became the sought-after boy-band of Nigerian music in 2003 when it released two popular singles, Runaway and Olufunmi. Though based in, Abuja, the group had fans swooning and screaming all over the nation and was a guaranteed crowd-puller at shows. The Federal University of Technology, Akure was where the three members first met back in the late 90s and forged a friendship and music group that would redefine the R n B scene in Nigeria. Their debut album, an 11-tracker, Expressions, was released in 2006 to resounding reception that further cemented their place in the hearts of many. Styl Plus was the avatar for Nigerian music at the time with its run of chart-topping hits and crisp, sensible videos.

The slide began with their obstinate refusal to relocate to Lagos, the nerve-centre of entertainment in Nigeria. This would be compounded by a lukewarm second album, Back and Better, which saw the ratings of the group dropping drastically as music fans started finding new music favourites. There have been several attempts to return to the front-burner, but fans’ apathy and the ever changing dynamics of the industry have not yielded. Prior to now, there was rumour of a break up but the group quickly rallied what remained of its artistry to inform a depleted fan base through a single that it was not true. Only time will tell how long the group will continue shying away from the obvious.

Continue Reading
You may also like...
Related Topics:break up, split, Styl Plus