He disclosed this to a curious crowd last night at Phynofest carnival which held at The Cathedral stadium in Enugu.

The show host, Phyno, had after performing his popular duet with Olamide ‘Fada Fada’ alone apologised for the ‘Wo’ crooner’s absence in this year’s show.

‘”But I have a surprise for you”‘, he told the disappointed crowd.

He then started his collaboration song with Psquare, ‘Financial Woman,’ at which point Paul, who now goes by the stage name Rudeboy, joined him on stage to sing the song’s chorus.

At the end of his performance, he replied the crowd that his brother was in America as he burst into laughter. 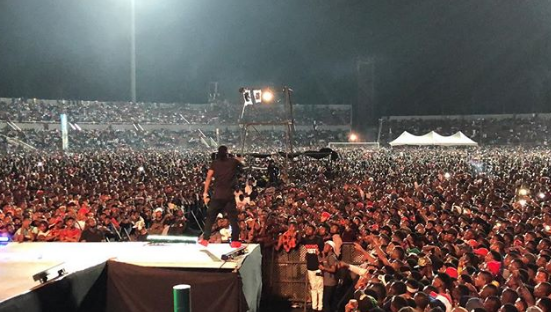 At a point people in the crowd booed him and interrupted his performance.

So in a bid to clear himself and save the night, Paul blamed Peter Okoye for the breakup of PSquare.

“We were singing together when my brother said he wants to go and discover his talent. I had no choice. But guess what, I have my brand new song titled Fire Fire”.

He later sang his solo song,’fire fire’ before leaving the stage.