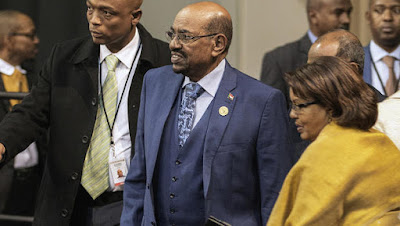 Sudan’s president slipped out of South Africa yesterday in apparent defiance of a court-ordered travel ban while judges studied an arrest order from the International Criminal Court (ICC).

The apparent dodge by Sudanese President Omar al-Bashir allowed the country to avoid a potentially sensitive confrontation between its obligations to the ICC and opposition to the court from its African partners.
The South African government yesterday argued against a court application to force the government to arrest al-Bashir.

Bashir stands accused in an ICC arrest warrant of war crimes and crimes against humanity over atrocities committed in the Darfur conflict.
Judge Hans Fabricius on Sunday barred Bashir from leaving South Africa until he had made a decision on an application by a human rights group calling for Bashir’s arrest.

The judge’s hearing resumed yesterday but was adjourned for an hour so the court could study documents submitted by the state.
State advocate, William Mokhari, said “to the best of our knowledge” Bashir remained in South Africa.

He, however, said five ports of exit had yet to confirm they had received an order not to allow the Sudanese leader to leave.
South Africa’s government has challenged the court’s decision because it has given immunity to Bashir and all other delegates attending the AU summit.

But Sudan’s state news agency (SUNA) reported that Bashir left South Africa aboard a flight bound for the Sudanese capital, Khartoum.
The ICC’s reach and jurisdiction is a major political issue in Africa, where many claim the court is biased against African leaders.

Earlier this month, South Africa’s Minister of International Affairs, Maite Nkoana-Mashabane, said diplomatic immunity would apply to all participants at the African Union gathering.
But South African activists went to court to press for the arrest of Bashir, who took power in a 1989 coup.

ICC prosecutor Fatou Bensouda has said South Africa is obliged as a backer of the court to detain and surrender Bashir.

In December, the ICC dropped charges against Kenyan President Uhuru Kenyatta after the prosecution said it had insufficient evidence. Kenyatta was charged in connection with post-election violence that began in 2007, leaving more than 1,000 dead