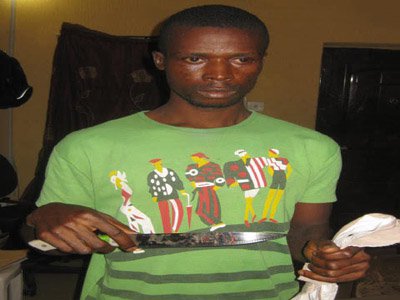 A 29-year-old man has told the police how his gang robbed a nursing mother with the aid of her driver.
Solomon Ugorji told Lagos State Special Anti-Robbery Squad (SARS) operatives that they robbed the woman the day she returned from America.

He, Obinna, the driver, who is said to be at large and Obiano Cosmos are said to have attacked a lounge in Victory Garden City (VGC) on May 16.
Ugorji, who claims to be from Bende Local Government Area of Abia State, said he was an undergraduate at the University of Nigeria, Nsukka (UNN), studying Public Administration, but could not continue after 200 level because of financial problem.

He said: “I worked as security guard to Stoke and Caldwell Engineering Services Limited, a company that was into general procurement, maintenance and manpower training at Kilometre 23, Lekki-Epe Expressway, Ajah, Lagos. I worked there for over two years on N40,000 per month.

I live at Majek in Balogun Estate along the expressway. The owner of the company, a woman, travelled to the United States of America (USA) for child delivery.

“On May 16, her driver, Obinna, (at large), told us that the madam would be coming back on Friday or Saturday with hard currency. He asked that we hatch a plan to rob the woman at a roundabout. He later asked us to go to the airport from VGC Roundabout by 7pm if we did not see her there. When the driver got to the roundabout, he stopped for the woman to buy fruits for her workers. The woman asked Obinna why he stopped without her order.

“The woman wound down and bought some fruits. As she wanted to wind up the glass, with our gun, we ordered her driver to reverse towards the toll gate. When we got near the toll gate, there was heavy traffic jam, so we ordered the driver to head towards Ajah. We warned her not to shout. When we got to Eleganza, there was a traffic jam again. The woman held my knife and it wounded her. She kicked the car door and it opened and hit an oncoming vehicle and both of us fell down.”

Ugorji said when he attempted to escape, some passersby pursued, arrested and beat him up before handing him over to the police. “I told the police that I am an armed robber and not a kidnapper. Our plan was to take her money only,” he added.

The suspect said he recommended Obinna to the woman and advised her to increase his monthly salary from N25,000 to N50,000.

“The other guy called Cosmos was holding a hammer which people mistook for gun. I was living with Obinna because I had problem of paying my house rent at Ajuwe, Ajah. We were all armed robbers but we did not operate with real gun. We used hammer as gun due to its shape,” he added.