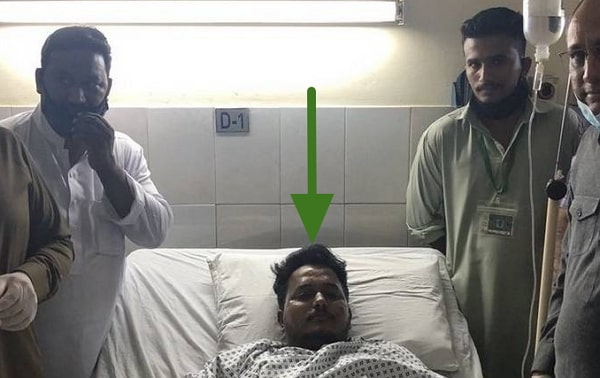 A man who was one of the 2 survivors pulled out of the wreckage of the Pakistani International Airlines jet that crashed on Friday near Karachi said on Saturday that all he saw as the burning jet went down was fire and smoke every.

Engineer Muhammad Zubair told Geo News that he also heard screams as passengers tried to fight for their lives.

Also rescued from the scene was Zafar Masood, president of the Bank of Punjab.

The plane had on board 99 people including the crew and went down in a crowded residential area near Karachi’s main airport following an engine failure.

“All I could see around was smoke and fire,” Zubair said from his bed in Karachi’s Civil Hospital.

“I could hear screams from all directions. Kids and adults. All I could see was fire. I couldn’t see any people – just hear their screams.”

“I opened my seat belt and saw some light. I went towards the light. I had to jump down about 10 feet to get to safety.”

According to Zubair, about 10 minutes after a failed landing attempt, the pilot told passengers he would try again but went down as the plane neared the runway.

Footage shows an apocalyptic scene with fires burning in a narrow street that was filled with debris from the wrecked aircraft, as well as buildings that were damaged and cars that were totaled, and a wall of choking black smoke.

Footage also shows Masood, who suffered just broken bones and scratches, being carried away from the burning wreckage.

He is now believed to be “conscious and responding well”.

State-run PIA and the Civil Aviation Authority (CAA) said 91 passengers and eight crew members were on board the 15-year-old plane, which was inspected by government officials as recently as November last year.

In a chilling final conversation with air traffic control, the captain of the aircraft said the plane had lost power from both its engines on its second attempt to land.

Continue Reading
You may also like...
Related Topics:survivor of crashed pakistani airline jet