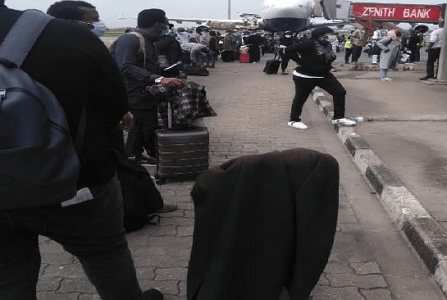 Ladies and gentlemen and fellow Nigerians, please compare this with the shambolic treatment meted out so far to Nigerians stranded abroad as a result of the Covid-19 pandemic by the Nigerian Ministry of Foreign Affairs and its accessories. As if they were criminals deported from a Third World country, these unlucky Nigerian nationals were subject to the brutal humiliation of having their passports impounded by officials of the foreign ministry even before they left London.

This was after they paid the mandatory four hundred and twenty five pounds evacuation fees demanded by the ministry in addition to many of them paying the three hundred and twenty five pounds for a mandatory Covid-19 test which became irrelevant once they landed since everybody was treated as a potential carrier of the virus. Thereafter they were abandoned on the tarmac at Ikeja because proper arrangement was not made for the onward journey to Abuja.

Among the eminent Nigerian citizens abandoned on the tarmac for a long spell was Prince Abiodun Ogunleye, a former Deputy Governor of Lagos State and elder statesman, who had trained in England as a Chartered Accountant in the sixties. Thereafter, a video of the evacuees went viral as they complained about the poor feeding arrangement and the grossly insensitive nature of their reception.

This is not the way to treat your own compatriots or to nurture patriotism. It is one of the reasons why Nigeria is teeming with enemy nationals and hostile interlocutors. To compound the infamy, the foreign affairs authorities, still solely driven by profit motive even in national adversity, released a document last week stating that evacuees would have to pay almost three hundred thousand naira for their feeding and accommodation while under observation in Abuja.

But barely twenty four hours later, and citing a “barrage” of queries, the ministry withdrew the document. The ministry now claimed it was able to source the funds from the Central Bank and the NNPC. The question is when did this become obvious and why was it not obvious before? And whatever happened to all the humongous donations we have all heard about? When governments profit from the misery of their own citizens, they lose authority and legitimacy.

It is worthy of note that after this dismal inaugural outing, the authorities have not attempted any further evacuation of Nigerians stranded abroad. Yet there are still thousands of Nigerians marooned in so many countries due to no fault of theirs.

After the cack-handed attempt to airlift Nigerians from Canada ended in a diplomatic fiasco, the authorities withdrew behind a wall of glum silence. Meanwhile those who resorted to self-help —as it was bound to happen— by unofficially arranging for their own evacuation have had the plane impounded by an unusually patriotic officialdom.

It is now obvious that the Nigerian Foreign ministry has resorted to deliberate and dilatory stalling, hoping that Covid-19 would quietly go away and save them from further embarrassment or that the elapse of time would return us to the much celebrated new normal when any stranded national can make his own travel arrangement. The offensive odour of this shameless racket is only exceeded by the shameless abdication of national responsibility. No wonder.

Continue Reading
You may also like...
Related Topics:nigerian citizens