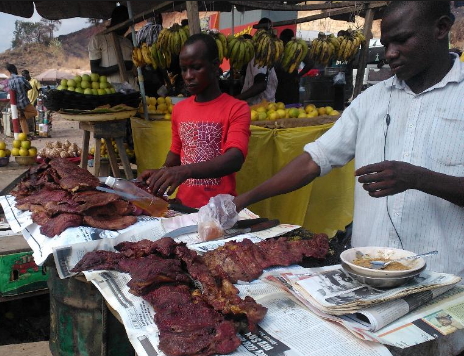 2 Suya Sellers identified as Yusuf Yisa andoNE Haruna, who allegedly stole valuables worth N450,000 were on Thursday in Lagos granted N200,000 bail each.
The accused were alleged to have stolen 12 telephone handsets and six accessories.

An Apapa Magistrates’ Court, which gave the ruling, also asked the accused to produce two sureties each as part of the bail condition.

Magistrate Titus Abolarinwa said the sureties must be gainfully employed and should show evidence of two years tax payment to the Lagos State Government.

He said the sureties should also show evidence of recent payment of their electricity bills.
Yisa, 28 and Haruna, 27, who reside in Apapa area of Lagos State, are facing a two-count-charge of conspiracy and stealing.

Earlier, the Prosecutor, Insp. Tony Elibeh, had told the court that the accused committed the offences on June 17 at Fadaini Street, Ijora Badia, Lagos.

Elibeh said that the accused conspired with some others still at large and broke into the shop of the complainant (name withheld) at about 2 a.m.

He said that the accused were caught by security guards, who saw them breaking into the shop with some sharp objects.

“Yisa and Haruna were apprehended, while the others escaped with the items,’’ he said.
The offences contravened sections 285, 307 and 409 of the Criminal Law of Lagos State, 2011.
Section 285 prescribes a three-year jail term for stealing, while Section 409 prescribes two-year imprisonment for conspiracy.

However, the accused pleaded not guilty to the charge.

The magistrate adjourned the case to August 3 for mention.